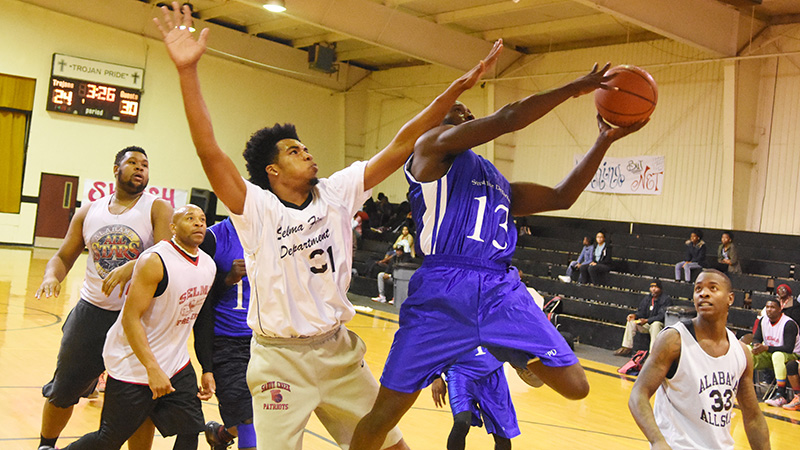 The Selma Police Department attempts a contested layup during the 2016 Selma PAL Team Up for Toys Basketball game. The police department and fire department will play this year’s charity game at Selma High.

The Selma Police Department and Selma Fire Department are going head to head in a friendly basketball game for a cause.

The Team Up for Toys Basketball Game will be on Dec. 16 at 1 p.m. in the Selma High School gym. Admission is either an unwrapped toy or $5 donation.

“Each year, we have Santa and his elves give out the toys. Most of the time we have enough toys to accommodate 100-200 kids,” Cowan said.

“We are just here to help you and not just see what you’re doing wrong or criticize or judge you. We just want to be a part of the community,” Cowan said.

With a mission to “fill playgrounds, not prisons,” the Selma Police Athletic League, started in 1998, is an after-school program for youth ages 7-17. The program provides youth with activities, basketball teams, service projects and more. There is no fee to sign up for PAL.

Cowan said its mission is to build positive relationships between police officers and youth. She believes that with a positive established relationship its easier for the youth to listen and communicate with law enforcement.

“We work with them starting in the first grade, so that by the time they are in the sixth grade they are familiar with us,” Cowan said.

PAL was amongst a group of recipients to receive a grant from Ala-Tom RC&D. They were awarded $2,000 to fund their summer program Athletes Creating Arts, where students learned about photography, drawing and painting, according to Cowan.