Morgan Academy brings out the brooms for Lowndes 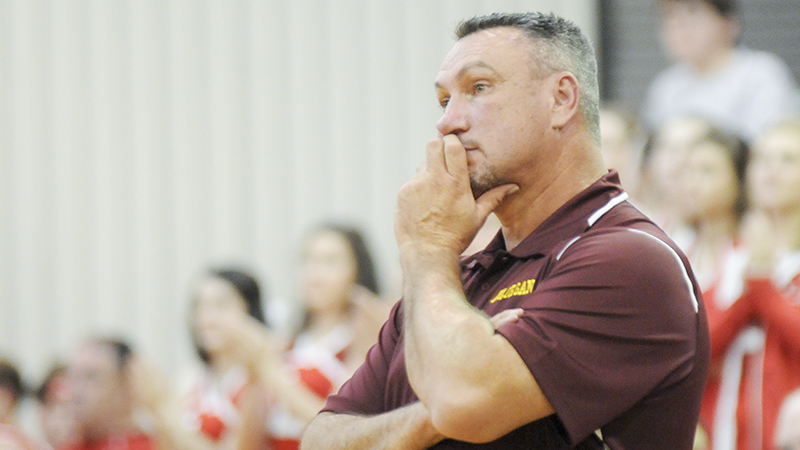 Morgan Academy head coach Mark Knight watches his team close out the 56-33 win over Lowndes. The Senators are 6-0 this season.

The Morgan Academy boy’s and girl’s basketball teams defeated Lowndes for the second time this season on Monday night.

The Lady Senators were trailing in the first quarter, but quickly turned the game around and won 33-2567.

“I think they are doing really well,” Lady Senators head coach Kayla Thacker said. “They really try to listen and do the things that I ask them to do, especially during the game. I think we’re going up each game.”

“[Lane] does really well,” Thacker said. “She has a very good basketball mind, and she shoots really well.”

Defensively, the Lady Senators were able to outrebound Lowndes and prevented them from getting too many second chance points. Morgan outscored Lowndes in every quarter but the first, and they held their opponent to just two points in the second quarter.

“I told them if we want to win, we’re going to have to block out and hold them to one shot,” Thacker said. “We can’t shoot very well, so we have to rely on us being able to rebound their one shot and not let them have two.”

The boy’s team finished off the night’s sweep of Lowndes with a 56-33 win to improve their record to 6-0. Head coach Mark Knight wasn’t pleased with the team’s performance in their first meeting against Lowndes during the Morgan Invitational, but they played better the second time around.

Lowndes jumped out to a 4-0 lead to start the game, but after Morgan started scoring they were unable to regain the lead.

The Senators had the size advantage inside and made it a priority to score inside the paint. Morgan guards worked the basketball to the post players or forced Lowndes to foul them on the way to the basket.

“We knew we had an inside advantage, so we tried to force it in there a little more to get our big guys some points,” Knight said. “We did a better job tonight getting it down in the post.”

Jay Creech and Britton Adams each made two three pointers, but the rest of the team scored on drives to the lane or on put-backs. Creech led the team in scoring with 17 points, senior center Sawyer Hopkins scored nine and junior forward Gunnar Henderson scored 12.

The Senators attention now looks ahead to Tuesday’s re-match at Tuscaloosa Academy.