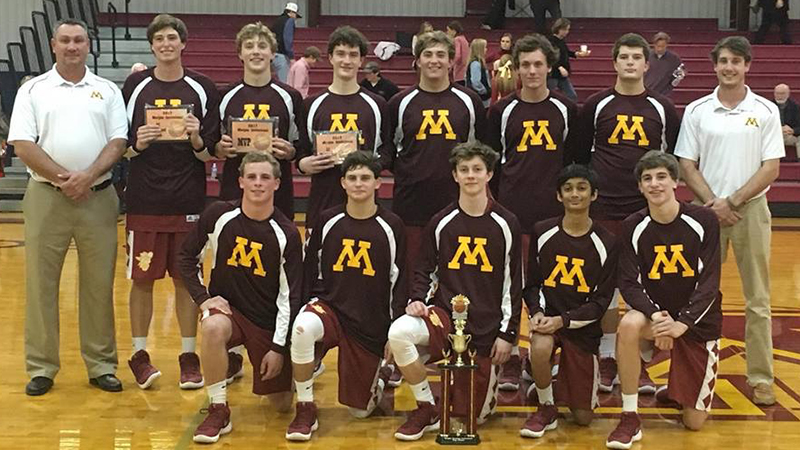 The Morgan Academy Senators hosted and won the 2017 Morgan Invitational.

The Morgan Academy Senators boy’s basketball team improved to 4-0 on the season after winning the Morgan Invitational tournament on Tuesday.

The Senators faced Wilcox first on Monday and easily won 56-20. Even though they didn’t play their best game, the team was never in any danger of losing the game according to head coach Mark Knight.

At the end of the first quarter, Morgan was leading 26-5. Knight pulled back the press, and was able to get his whole lineup some playing time in the game. Dione Allen led the team in scoring with 11 points, and Richard Alan Waters came off the bench to score nine points.

“We didn’t play as well as we did last week, but everybody got to play in both games and that was a positive,” Knight said. “All 12 of my guys scored…everybody contributed to the win.”

In the championship game, the Senators defeated Lowndes Academy 60-41. Despite the 19-point differential, Lowndes put up a better fight than Wilcox was able to.

“Lowndes came out and actually took it to us early,” Knight said. “They shot the ball well.”

The Senators had an 11-9 lead at the end of the first quarter, but the game didn’t stay tight for much longer. Morgan outscored Lowndes 22-5 in the second quarter, which put the game out of reach.

According to Knight, his team will need to play better to be ready for stiffer competition.

The Lady Senators didn’t win their bracket, but they did earn their first victory of the season with a win against Lowndes during the tournament, according to Knight.

Morgan’s next game is on Thursday, Nov. 30 at Clarke Prep.