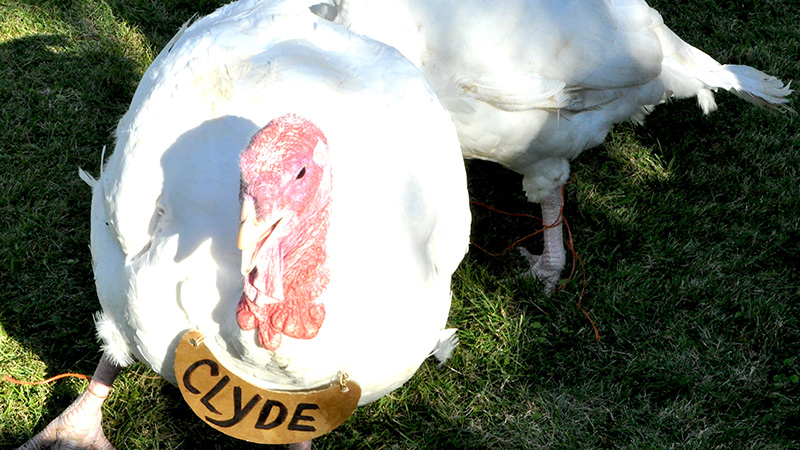 Clyde and Henrietta pardoned from the Thanksgiving table by Governor Kay Ivey, Friday, Nov. 17 at the Governor’s Mansion. The two lucky feathered friends were raised on Bates Turkey Farm in Lowndes County.

By Fred Guarino | The Lowndes Signal

Alabama Governor Kay Ivey continued a 68-year-old tradition when she received a turkey from Bates Turkey Farm in Lowndes County and pardoned Clyde the Turkey at the Governor’s Mansion in Montgomery.

However, as the second female governor of Alabama, Ivey also said it was appropriate for her to pardon Clyde’s special friend Henrietta.

Becky Bates Sloane, daughter of the late Bill Bates Jr., who started the tradition of presenting a turkey to the governor with Jim Folsom in 1949, said, “It truly has been a blessing for our family to participate in this every year.” And each year the governor pardons Clyde the turkey, who is spared along with his girlfriend Henrietta.

She made the presentation with Alabama Commissioner of Agriculture & Industries John McMillan and CEO of the Alabama Poultry & Egg Association John Adams looking on.

Sloane said Adams and his staff were a help to all the farmers in the state, especially helping turkey farmers wade through federal regulations.

Sloane said Thanksgiving was her parents’ favorite holiday of the year. And she said this year something restarted to honor her parents is the Blankets for Blessings started by Patsy Riley, when she was Alabama’s first lady.

Blankets for Blessings is a drive for blankets for the needy. She said it is a way to give something back to the people who are not going to be able to sit down at the dinner table with their family to enjoy Thanksgiving.

Sloane asked that everyone getting ready for the Thanksgiving meal to “pay something forward.” She said, “I guarantee you, whatever you give, you will get back ten-fold.”

McMillan spoke about how important poultry is to the state, including turkeys, even though there are not many turkey farmers. He said if Clyde the turkey, who was pardoned Friday, had been prepared for the dinner table, he would go about 30 pounds and would have fed one serving to about 60 people.

Ivey thanked Sloane for providing the turkey and opportunity to honor Sloane’s father’s memory. She also said, “Bates House of Turkey (in Greenville) makes some fine turkey and dressing.”

She said, “Thanksgiving reminds us how fortunate we all are to live in America, the land of free and the home of brave, and how lucky we are to be citizens of Alabama the beautiful, sweet home Alabama.”

She said it reminds us to cherish the strong bonds that we have with family and friends. And she said Thanksgiving cannot be celebrated without giving thanks to all the men and women who serve in our military and who have paid the ultimate sacrifice.

Ivey also asked Alabamians to reach out and help someone in need, “be a blessing to someone else.”

She said ultimately, “This year, I’ve decided to pardon not one, but two feathered friends, Clyde and Henrietta.” She said, “I’m the second female governor of Alabama, and I think it makes sense to also pardon Henrietta.”

Ivey said, “Clyde and Henrietta, by the power invested in me, I hereby pardon both of you from the succulent trappings of Thanksgiving dinner. And may you live out the rest of your days in peace and happiness together on the Bates Turkey Farm.”