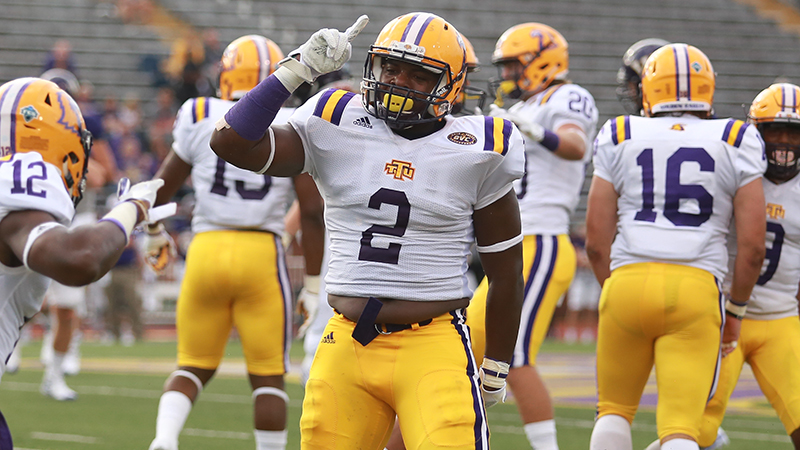 Former Selma High football coach Leroy Miles said that he always told his former player Aderick Moore to play the game at full speed, and that’s exactly what the sophomore linebacker at Tennessee Tech University did.

“When I talk to him the night before his games, I always tell him to play the game full speed,” Miles said. “It’s evident that Aderick listened somewhere down the line to me, and he’s doing a fine job at Tennessee Tech.”

The 6-foot-1, 245-pound Selma High alumnus was the starting linebacker for the Golden Eagles and played in every game this season. He totaled 95 tackles, 3.5 sacks and forced a fumble.

“Starting as a sophomore, it was truly an honor,” Moore said. “It was a great learning experience throughout the whole season that I can use to build on towards next season.”

Being named a starter in his second season thrust Moore into a leadership role on the team. The humble linebacker credits his teammates for giving him the opportunity to lead.

“I couldn’t have done it without them,” he said. “I wasn’t perfect every game, but they allowed me to make the plays and I appreciate them for that.”

His week nine performance in the team’s only win against Tennessee State earned him the Ohio Valley Conference Player of the Week award.

In that game, he made 12 tackles including five tackles-for-loss, two sacks, a forced fumble and a pass breakup.

He found out he was named player of the week just before he was going to study hall. Teammates and coaches sent him photos of the news and he received a notification on Twitter about the announcement.

“When I got out of study hall I called my mom,” Moore said. “She was the first one I actually called and told the news to.”

Moore’s mother Adana Moore congratulated Aderick on his accomplishment, but she also kept him grounded. Aderick said that his mom has always been his motivator, and she wanted him focused on finishing the season.

“She always tells me that God has a plan for me, so let’s keep striving,” he said. “I use that as motivation. I did it one time, and I know I can get Player of the Week more than once.”

Tennessee Tech finished the season 1-9, but Moore plans to keep working hard and lead his team again next season.

Miles described his former player as a person that the city of Selma can be proud of.

“The Selma community is very, very proud of him,” Miles said. “The one thing that I see in him now, is that he loves the game. He’s committed to getting better every year, and it’s evident by the way he played this year.”