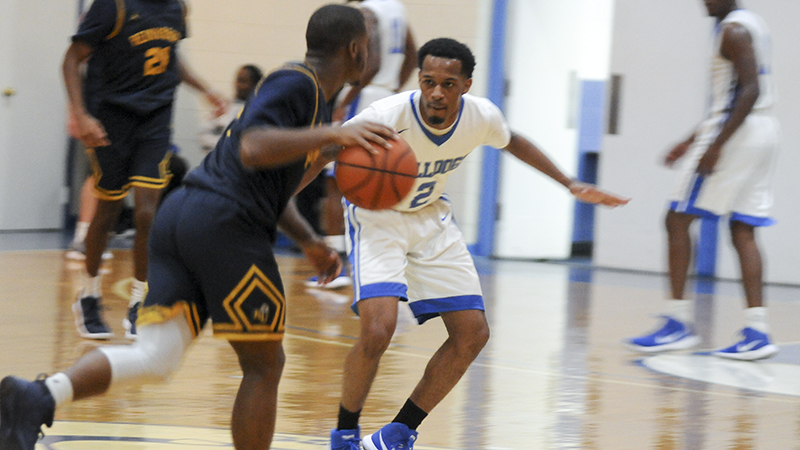 Selma University guard Montez Brown picks up his man at half court during the Bulldogs 109-96 win over Reinhardt University.

The Selma University Bulldogs (1-5) earned their first win of the season on Tuesday night defeating the Reinhardt University Eagles (5-3) 109-96.

“They brought some pride and intensity to the game all night,” Selma head coach Raymond Brown said. “That was the difference. Plus, we made shots that we’re supposed to make.”

The Bulldogs looked like a different team than the one that lost to Miles College 102-83 the night before. Selma University was able to attack the interior of the Eagles defense. Yurman Barnes led the Bulldogs with 23 points, and Tavore Igus scored 21.

Selma had the size advantage inside with Igus, who is 6-foot-9, and consistently worked inside throughout the game.

Instead of digging themselves into an early hole, the Bulldogs jumped out to a quick 7-0 lead to start the game. They led for the majority of the first half, and Jaoquez Fields hit a three-pointer from the corner with 3 seconds left in the first half to give Selma a 53-48 lead at halftime.

In the second half, the Bulldogs missed free throws allowed the Eagles to cut down their lead. They shot 50 percent from the free throw line in the second-half on 24 attempts. The Eagles were closing in when Igus had to leave the game with 7:25 left after he banged his head on the floor after going up for a rebound.

Fortunately, he was only off the court for less than two minutes, and scored on his first possession back in the game to give his team an 86-81 lead.

The Eagles tried to up the pressure, but the Bulldogs were composed enough to break their full court press. The team managed to hold on and celebrate their first win of the season.