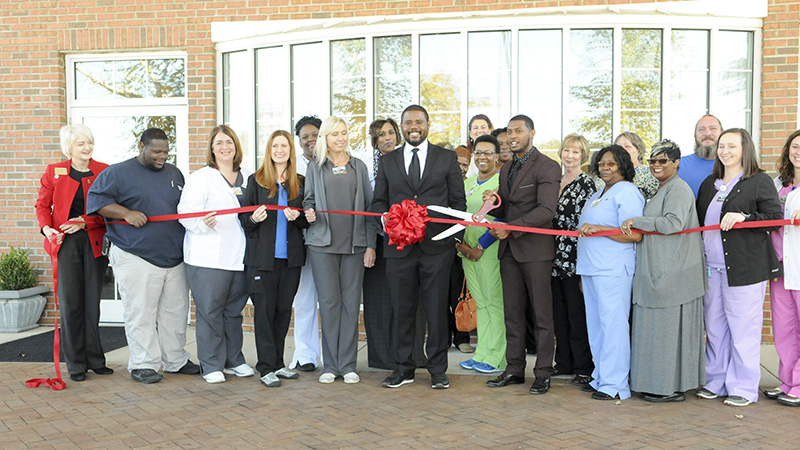 The company purchased the center in July for $8.75 million. Administrator Dennis Davis had the honor of cutting the ribbon.

“It was a gem of a find for us because the place was just so managed and ran very well,” Davis said. “The Hises (former owners) actually reached out to us during the acquisition because they were actually very selective of who they wanted to take over pretty much their baby.”

He said the company knew it wanted to purchase Park Place because of its location, its staff and how the center was managed.

“This place was off the charts in what they were looking for if you had to grade a building when you’re giving it a score for acquisition,” he said.

After the ribbon cutting, staff members took people on tours to show off the center, which has 103 beds. With the addition of Park Place, Diversicare owns 21 centers in the state of Alabama and 77 overall. When Diversicare purchased the center, it estimated it would contribute $8 million in revenue annually.

The purchase of Park Place was the company’s 47th acquisition since its decision to expand, according to Kelly Gill, chief executive officer.

Davis said one of the most impressive prospects about Park Place was its staff.

“The competence is incomparable to a lot of places,” he said. “We have a lot of LPNs going to RNs and a lot of RNs in nurse practitioner programs. Education is of the highest, and we actually schedule around here to accommodate some of those schedules for people who are doing higher education.”

Since buying the center, Davis said Diversicare has made minimal changes.

“The place is run so well Diversicare wanted to keep its integrity. We didn’t want to implement a lot of systems because the place was operating on such a high level,” he said. “We changed some systems here and there and tweaked some things here and there just to get them on the culture of Diversicare, and that’s the only thing we really wanted to do.”

The center is a nursing home, but Davis said they also do several types of rehabilitation and therapy, such as physical therapy and speech therapy.

Davis said the acquisition was exciting, and he looks forward to serving the community.