Selma U unable to get first win against Miles 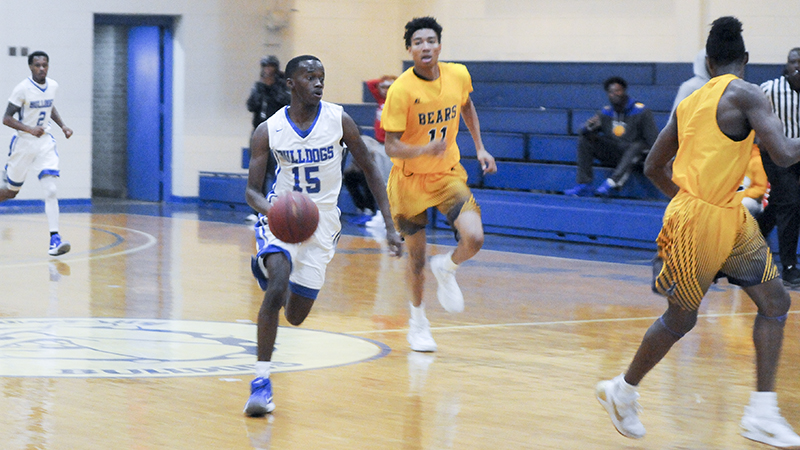 Selma University guard Cedric Davis pushes the ball forward on a fast break during the 102-83 loss to Miles College on Monday night.

The Selma University Bulldogs had difficulty stopping the Miles College Bears offense on Monday night in a 102-83 loss.

“We played decent in spots,” Selma University head coach Raymond Brown said. “Defense didn’t hold over the course of the game. If you don’t play defense, you’re not going to win ball games.”

The Bulldogs fell behind early and were down 53-38 at halftime. In the first 20 minutes, Torian Scott led the team with 10 points. Meanwhile, Miles already had two players scoring in double-digits.

The team attempted to mount a comeback in the second-half. But no matter how often they scored, Miles was able to maintain a safe lead.

“We got too deep in the hole,” Brown said. “When you’re that deep in the whole, it’s hard to work your way back. You can’t trade baskets to get back in it.”

Miles had five players finish the game scoring in double-digits.

“I think we scored enough points to win a ballgame, but we’ve got to stop somebody,” Brown said. “We’re still young, but that’s no excuse.”

The Bulldogs slide to 0-4 on the season, and they have another tough match against the Reinhardt University Eagles on Tuesday, Nov. 21.

“We’re not defensive minded right now,” Brown said. “We’re not there yet, but we’re young and we’ll get there. We’re maturing every day.”