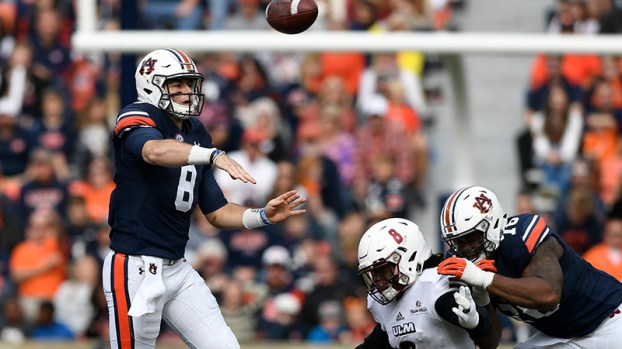 By Charles Odum | The Associated Press

AUBURN (AP) — Auburn players could be forgiven for looking ahead to next week’s visit from No. 1 Alabama.

Forgiveness came easy after the Tigers made a strong recovery from their sluggish start against Louisiana-Monroe.

Darius Slayton’s 50-yard scoring catch late in the first half gave No. 6 Auburn the lead and the Tigers pulled away for a 42-14 win over ULM on Saturday to set up next week’s showdown with the Crimson Tide.

Auburn (9-2, 6-0, No. 6 CFP) can earn a spot in the Southeastern Conference championship game by beating Alabama in a rivalry in which it’s rare for conference and national implications to mean more than state bragging rights.

“It’s what college football is all about and what we came to Auburn for,” H-back Chandler Cox said.

Last week’s win over then-No. 2 Georgia , which was the No. 1 CFP team, makes the visit from Alabama even bigger than most Iron Bowl games.

Kam Martin scored two touchdowns, one rushing and one receiving, in the third quarter. Nick Ruffin scored on a 45-yard interception return in the fourth.

Despite a sluggish first half, Auburn’s final production was still impressive: 317 yards rushing and 552 total yards.

Auburn also will be playing to protect its hopes for a spot in the playoff, a possibility that seemed unlikely after a loss to Louisiana State on Oct. 14 left the Tigers 5-2.

“I am excited,” quarterback Jarrett Stidham said. “This is why you play here at Auburn, for games like this against a team like Alabama.”

The Tigers were tied at 7 with ULM (4-6, 2-4 Sun Belt Conference) late in the first half. It was unusual even in a game where the emphasis was on guarding against a letdown.

“I think it was odd,” coach Gus Malzahn said. “We didn’t have that edge that we have.”

Malzahn was happy with the way his players responded in the second half.

“Even though we didn’t start out real fast, we came out after halftime and took care of business,” Malzahn said.

ULM coach Matt Viator said he was proud of his team’s play in the first half.

“I think we competed hard and made some plays on defense,” Viator said. “We just could never get a whole lot going on offense the whole game. We turned it over in the second half. Give them credit, they’re really good. They are hard to move the ball against.”

Auburn took the lead on Slayton’s bomb from Stidham with 1:27 remaining in the half.

Auburn pulled away in the third quarter. Stidham added a 41-yard touchdown pass to Martin, who also scored on a 1-yard run.

Cornerback Javaris Davis had an interception and a forced fumble in a span of about two minutes late in the third quarter to help Auburn take control.

The Warhawks opened with a 13-play touchdown drive. Wide receiver Brian Williams scored on an end-around run on fourth down. Williams scored again on a 70-yard pass from Garrett Smith with less than 6 minutes remaining. Malik Miller had a 1-yard touchdown run for Auburn.

By John Zenor | The Associated Press TUSCALOOSA (AP) — Alabama came out of the locker room with one touchdown... read more