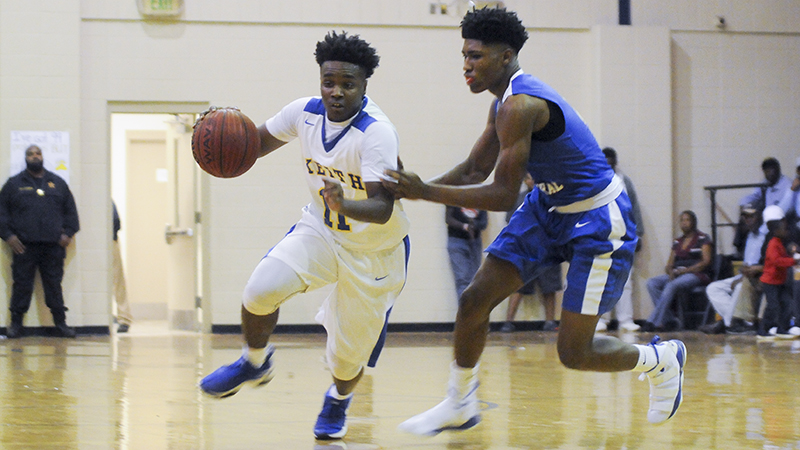 Keith guard Ervin Allen drives through the Jaguars defense in the 67-56 win on Friday night in Orrville.

Keith High School came away with two wins Friday night  in Orrville against Wilcox Central in their second game of the season.

The Lady Bears only had a two-point lead at the end of the first quarter, but were able to score 14 in the second to give the team a 22-14 lead at halftime. The Lady Bears outscored the Lady Jaguars in each quarter. Jakyra Simmons led the team with 18 points and she made four three-pointers. Shatavia Moore was the second leading scorer with 11 points.

The girls played a strong defensive game and forced the Lady Jaguars into turning the ball over throughout the game. Wilcox Central highest scoring total in a quarter came in the fourth quarter when Lady Bears head coach Cecil Williams started to rest his starters.

“We did a whole lot better on defense, but we still need to improve on rebounding,” Williams said. “Overall effort, they did pretty good. They hustled hard, made good shots and we even improved on free throws.”

The boys game was much more competitive.

Throughout the first half, neither the Bears nor the Jaguars were able to create any separation between each other.

The Jaguars won the first quarter narrowly with an 18-17 lead. The second quarter was just as tight, but Keith made the first adjustment that helped them get the lead before halftime.

Bears head coach Clifton Reeves switched to a full court pressure in the last three-minutes of the second quarter. A couple turnovers led to points in transition that helped give his team a boost.

“When we started pressing and trapping it got the crowd into the game,” he said. “It changed the momentum of the game.”

The home crowd rose to their feet when Justin McGuire turned a steal into a two-handed swinging dunk. McGuire had 15 points in the game, but the leading scorer was Arayvion Jones who finished the game with 21 points. Jones had 10 in the second quarter alone.

The Bears took their lead into the third quarter, but the Jaguars wouldn’t lay down. The Bears turned the ball over too many times themselves, but were able to minimize the damage.

Each time the Jaguars tried to sneak back into the game, Keith would go on a small run to keep them at bay.

Keith had a 14-point lead with 2:20 left in the fourth quarter, which was the largest lead of the game. Mark Young iced the game with two free throws and the Bears improved to 2-0 on the season.

“It was a good performance by the boys in spots,” Reeves said. “We got relaxed and they started to make a run, but on the defensive end is what really put us ahead.”