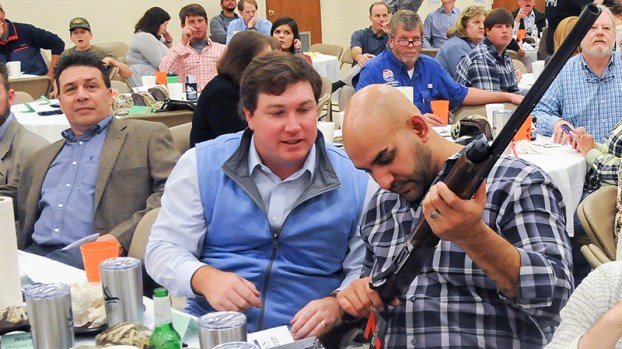 Potential bidders check out one of the gun’s of the year at the Delta Water Fowl live auction banquet on Thursday night.

“Events like this are great for Delta Waterfowl,” regional director Cooper Huff said. “It shows that we want to be a part of these communities.”

The evening began with a cocktail hour for mingling until the dinner catered by Hancock’s Barbecue was ready to be served. As the room filled, attendees lapped around the room to check out the various items that were to be auctioned off or raffled later in the night.

“The event is a great way for a lot of hunters to get together and socialize,” Riverbend chapter president Tripp Bowie said. “We have 22 different guns ranging from pistols to rifles… We’ve got guns ranging from $200 up to $2,500.

The foundation auctioned off 25 items including artistic prints, guns and hunting trip packages. Raffle participants had a variety of options from buying a single ticket for $20 or one of the raffle packages that ranged from $100-500. The $500 raffle package’s total value was $1,025.

Delta Water Fowl brought a professional auctioneer to run the live auction. He scanned the room announcing the prices with incredible speed as bidders competed for the items they set their eyes on.

The banquet is the Delta Waterfowl Riverbend chapter’s best fundraiser of the year.

The money raised goes to the national organization, but 15 percent is returned to the chapter to go towards community engagement and duck habitat conservation.

Earlier this year, the Riverbend Chapter enlisted the help of the local Boy Scouts troop to build duck beds for nesting water fowl. The organization provided all of the materials and the scouts assembled them.

The Delta Waterfowl Foundation “is a conservation group working to produce ducks and secure the future of waterfowling in North America.”

In the Riverbend chapter’s first year, they approximately 130 people attend the inaugural banquet.

“They had an amazing first year and they were one of the top chapters in the country,” Huff said. “This room is packed, so this chapter is really on the up-and-up.”

In year two, they saw an increase to more than 170 attendees according to committee member Chris Griffin.

“We’re very pleased with the turnout,” he said. “We pre-sold more tickets than last year’s number… This is our second year and we seem to be growing. There’s a lot of interest and excitement about the event, so we’re very proud of the turnout.”

Hunters and their families came out to participate in and enjoy the auction. Christopher Britt, 8, came with his family and enjoyed seeing all of the outdoors equipment up for grabs.

Lowell Butts also came to bid at the banquet, but his sights were set higher than the water gun. Butts has been to both banquets and appreciates what the Delta Waterfowl has done for both the community and its hunters.

“I would say hunting is probably up there with our top income for this area,” Butts said. “These events raise money for the wildlife and for the ducks. They put money back into our local hunting in this area. It’s a great event.”