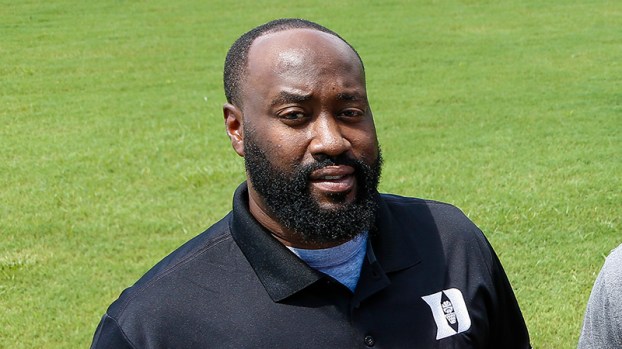 Cliff Nix begins his first season as a head coach with the Dallas County Hornets.

The Dallas County Hornets boys’ basketball team is under new leadership this season as long-time assistant coach Cliff Nix has taken over as the varsity head coach.

Nix is stepping in for Willie Moore, who coached the Hornets for 12 seasons. Dallas County won the area championship seven times and won the state championship in 2014 under Moore’s leadership.

“He was my hand-picked selection to succeed me as a basketball coach because I believe in people paying their dues, and he has paid by working from the ground-up within our program,” Moore said.

After 10 years as the assistant, Nix has the keys to the team, and he’s excited for his new role.

“I’m excited about this season, and the kids are excited,” Nix said. “It’s a little different role from being the assistant coach.”

The Hornets are currently 0-2 on the season with early losses to Selma High School and Keith High School. Nix is still adjusting to his new role and taking on the added responsibilities. He’s learning all of the additional details that go into coaching beyond the “x’s and o’s.”

The Hornets are in full rebuild mode this season, which is unusual for a team that has been so dominant over the last decade. This year’s team has six freshmen on varsity and only one senior with experience playing varsity basketball.

“We’re a young team, but we’re growing and learning everyday” Nix said. “It’s an upside to it, and we’re getting better each day.”

Even though the leadership has changed, Nix is sticking to the principles that Moore succeeded with when he was the coach. He wants to emulate the disciplinary tactics Moore used to mold his players into a successful team. The playing style has been working in the past, so Nix has no plans to mess with the winning formula.

“We didn’t change much,” he said. “The only thing that really changed was the difference in the players. We’ve got new players and a bunch of them.”

The younger Hornets players are getting a crash course in what it takes to play on the varsity level. They’re still adjusting to the difficulty of practices and speed of games.

“In the past, we’ve always had several seniors to return and shoe them exactly what needs to be done and how hard they need to practice for varsity level,” Nix said. “We’ve got a bunch of J.V. guys playing on the varsity level that don’t know how hard we actually need to go. It’s been a little shocker to us.”

However, the most unique thing about this year’s team is their bond with one another, according to Nix. Despite a slow start and a program rebuilding on a learning curve, the team is a close-knit group.

“This team gets along a lot better than our teams in the past,” he said. “Every team’s going to have some issues, but we’re a closer team than we were in the past.”

The Selma QB Club held their final meeting of the year Monday evening at the Selma Convention Center. The club... read more