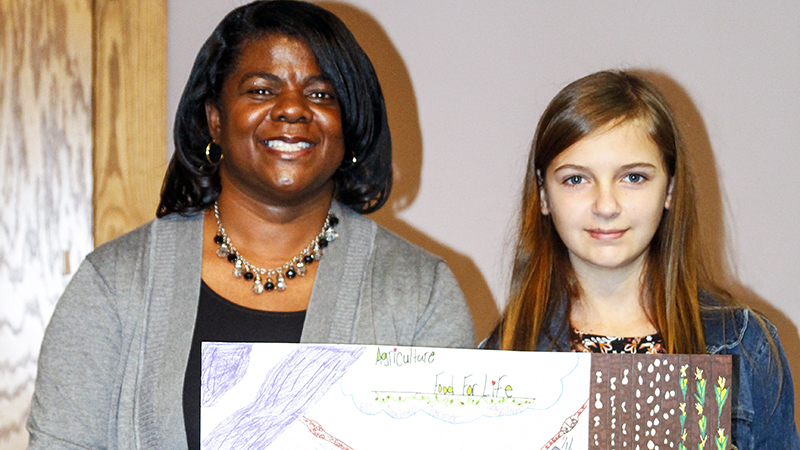 Courtney Farmer, a student at J.E. Terry Elementary, won the fourth- through sixth-grade Farm-City Week poster contest. She is shown with Callie Nelson from the extension system.

The connection between farms and cities was celebrated last week during the annual Farm-City Week breakfast at the Central Alabama Farmers Co-op.

The annual event is sponsored by the co-op, Alabama Cooperative Extension, the Selma and Dallas County Chamber of Commerce, local farmers and businesses. This year’s theme was “Agriculture: Food for Life.”

Extension coordinator Callie Nelson said everyone participates in agriculture just by eating, but we often don’t stop to think about where our food comes from.

“Ninety-nine percent of us have nothing to do with the production of our food. However, we enjoy an abundance of food supply, and we all participate in agriculture a minimum of three times per day,” Nelson said. “You guys are doing that right now. We eat breakfast, we eat lunch, and we eat dinner.” 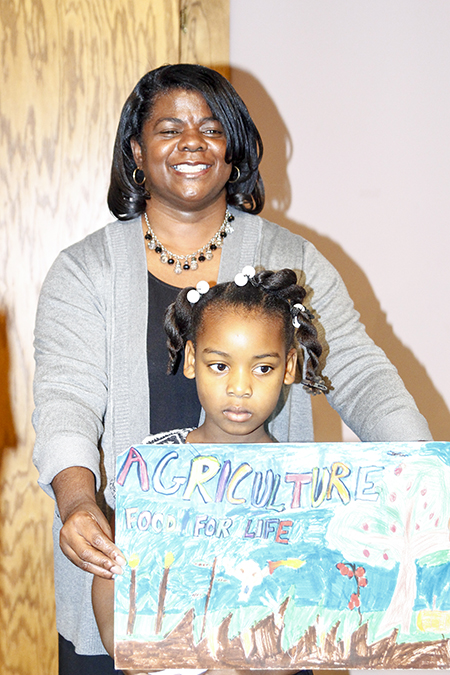 Tyshondra Watts, a student at Southside Primary, won the kindergarten through third-grade Farm-City Week poster contest. She is shown with Callie Nelson from the extension system.

Nelson said not having to worry about where our next meal is coming from allows people to focus on other work and hobbies and has driven advancements in human history in areas like art and science.

“We never really stop and think about where all the food is coming from,” Nelson said.

Judy McKinney from the Orrville Farmers Market was the guest speaker. She talked about what drove her and her husband to open the farmers market.

McKinney said the idea was first conceived about 13 years ago around a kitchen table in Florida.

About three years ago, the McKinneys started a farmers market in Orrville, which has evolved into the store and restaurant that opened this time last autumn.

McKinney said she wanted to come up with a way to get more people to stop at the farmers market. 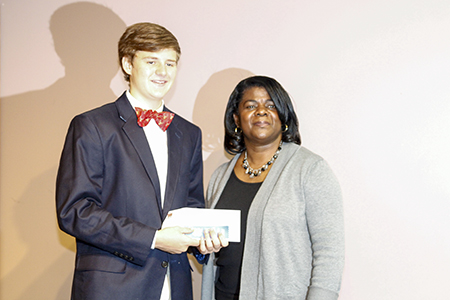 Park Chittom III, a student at Morgan Academy, won the tenth- through 12th-grade Farm-City Week essay contest. He is shown with Callie Nelson from the extension system.

“How do you make those cars stop that were continuing to go by?” McKinney said.

The Orrville Farmers Market also gives food three chances to be used locally. Farmers can continue to sell at the farmers market, but the store will buy their produce and sell it for them five days a week or use the food in the restaurant.

“We’ve taken that produce that only had one opportunity for use at the farmers market, and we’ve given it two more levels,” McKinney said. “We buy produce from local farmers, and we sell it in the store and cook it.”

During the breakfast, winners of the annual Farm-City Week poster and essay contests were also announced.

Morgan Wallace from Morgan Academy won the essay contest in the seventh- through ninth grade division.