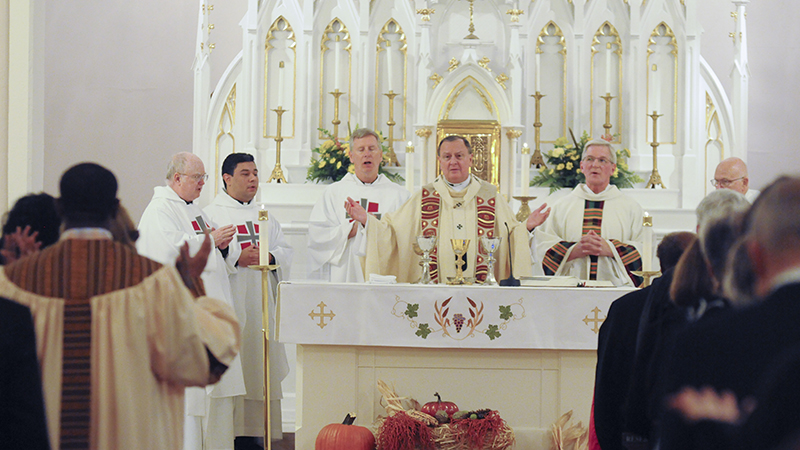 The sound of the St. Peter Claver Catholic Church Choir from New Orleans echoed through Queen of Peace Catholic Church Thursday night to help celebrate 80 years for the Edmundite Missions.

The missions hosted a mass celebration and a gala dinner to celebrate the momentous occasion.

“To see many faith traditions under this one roof all praising God together with one voice and one heart, this is what I think the Lord intends for us when he says to come together and be family,” said Chad McEachern, president and CEO of the Edmundite Missions.

Former Queen of Peace pastor Stephen Hornat and Archbishop of Mobile Thomas Rodi spoke during the mass. The crowd then gathered at the Selma Convention Center for dinner and more celebrating.

The missions was founded in July of 1937 when father Francis Casey and father Barney Paro came to Selma with $50 and a secondhand Pontiac to minister and help African Americans in extreme poverty.

“Pope Pius XI had issued a call for American religious congregations to spread Catholicism among the poor African Americans in the deep south, and the Society of St. Edmund answered that call,” McEachern said. 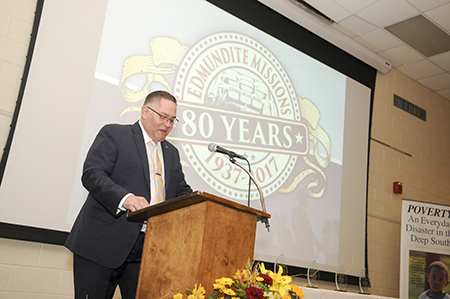 Chad McEachern, president and CEO of the Edmundite Missions, speaks Thursday night during a gala to celebrate the 80th anniversary of the missions.

McEachern said neither Casey nor Paro had ever been south of the Mason-Dixon Line. He said when they arrived in Selma they turned an abandoned brothel into their home and a chapel.

McEachern said the work started by Casey and Paro feeding those in need sandwiches from their back door.

In 1965, when hundreds of marchers were beaten and gassed on Bloody Sunday on the Edmund Pettus Bridge, Good Samaritan helped ail their injuries.

The Bosco Nutrition Center was opened in 1986, and by Thanksgiving, it will have served 3 million meals to those in need. More than 1,000 meals are served there each day to people in need.

Hornat said the work the missions has done over the last 80 years is amazing, as well as the many people that had a hand in its success.

“The story is not about father Casey and father Paro alone, or those that followed them, or those that worked with them,” he said. “No, it’s about what God has accomplished through them.”

During the gala, four Gaudium et Spes Awards were given out to recognize people that have helped the missions over the years. Gaudium et Spes translates to Hope and Joy.

The recipients of the awards were Bernard Simelton, president of the Alabama NAACP State Conference, Nancy and the late Andrew Sewell, Alston and Anne Fitts and Rep. Prince Chestnut.

Now that 80 years have come and gone, McEachern said the missions is focused on the next 80 years and what it can do to help alleviate poverty in the community.

“While we marvel at the work that has been done over the past 80 years, we also turn our eyes upon the future knowing that our greatest challenges still lie ahead,” McEachern said.

The missions is working on starting initiatives to help impoverished people become self-reliant and to teach them skillsets so they can become better equipped in the workforce.

McEachern said the missions has started a catering service, which provided the meal for the gala, and are working on other endeavors.

“It is a great privilege to live the gospel every day and to do it with dignity and purpose and to be of service,” he said.

“As much as we give to folks, we are also fed by their spirit, their love and their care and concern for us.”

“The lesson from these past 80 years reminds us that in times of scarcity, God gives abundantly,” Hornat said.