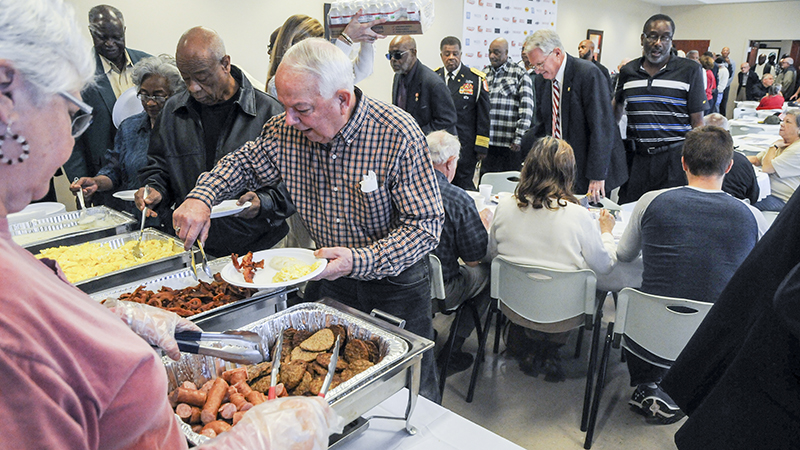 “I don’t think anybody left here today without feeling special,” MJ93/90 president Thomasene Johnson said. “We wanted to make sure that every veteran felt special and appreciated. That was our goal, and I think we met it. I’m very proud of the attendance, and really happy about how the program turned out.”

The event was free to all veterans and their families. Everyone received a hot plate of grits, eggs, bacon, and sausage to enjoy during this year’s presentation.

The mayor’s office, Congresswoman Terri Sewell’s office and the Selma Chamber of Commerce came to the event to show their support and offer thanks to the veterans for the service and sacrifice they gave to this country.

“We’re just overwhelmed with the outcome of the program today,” chamber executive director Sheryl Smedley said. “We had over 100 veterans attend… It’s just a day to honor those who made a sacrifice and continue to make a sacrifice for our country.” 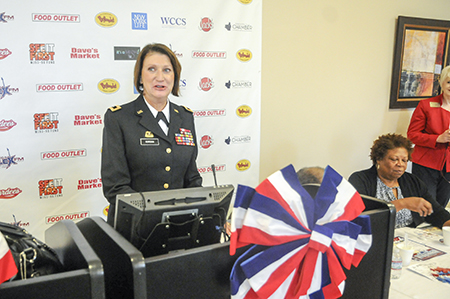 The speaker for the breakfast was Major General Sheryl Gordon of the Alabama National Guard.

“It’s always an honor for me to meet with the veterans and their families who have served our country and sacrificed for our country to enable me to continue to serve in my capacity,” Gordon said. “To be a part of a program that honors their service is always very heart-warming, fulfilling and gratifying.”

Gordon is a Selma native who attended Selma High School and is also the first woman to earn the highest rank in the Alabama National Guard.  She spoke to the women’s group at Cornerstone Presbyterian Church this past Tuesday, but her message to the audience of veterans at the breakfast had a different feel to it.

Instead of going through the detailed history of the holiday, Gordon connected with the former servicemen by letting them know that they were appreciated.

She said that the nation currently has the largest population of young veterans since Vietnam and that all veterans still have much to offer.

Every branch of the U.S. military was represented except the Coast Guard. The oldest veteran in attendance was Tom Sherrer, 94, who fought in World War II and served under General George Patton. The youngest was Alicia Chestnut, 34, who was a senior airman in the U.S. Air Force.

Sam and the other veterans enjoyed communing with each other and enjoyed the community’s display of appreciation for their sacrifice.

Veteran Army National Guard Master Sgt. Mark Boswell said he enjoyed “getting together with our old fellow soldiers and getting to hear the old war stories.” He hopes that an event like the appreciation breakfast will inspire the younger generation to want to serve their country.

“It was a great event today, and it brings back a lot of memories,” he said.