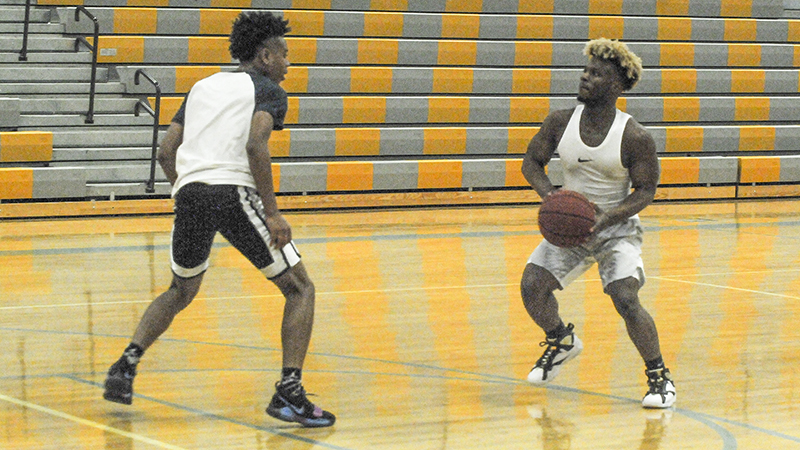 Football and volleyball season has ended for both schools, and the basketball teams have been practicing since mid-October to get ready for their season to begin.

Head coach Ronald Lane is entering his second season with the Saints and is looking forward to getting started. The Saints put on a Mid-day Madness rally for the school to introduce this year’s boy’s and girl’s teams to the rest of the school.

“The student body was excited, and they came out to support us pretty well,” Lane said. “Our girls and boys had a chance to go up-and-down in front of the crowd and get themselves acclimated to playing in that environment.”

Heading into the 2017-18 season, Lane is optimistic about his returning players, and the experience they already have. He said the team does have a mix of young players, but the experience at the guard position is important to have.

“We’ve got a bunch of guards coming back from last year. Guys that got experience off our area championship team,” Lane said. “We’ve got a mix of freshman with sophomores and juniors this year, so we’re going to be fairly young, but we’ll have experience at the guard spot which is very crucial.”

Senior guard Ja’mere Abrams said the team has spent the last few weeks gelling together and learning how to play with each other to get ready for the season.

“We just want everyone to know the plays and get comfortable with each other,” he said. “We’ve gotten good now.”

Lane and the Saints are on a mission to return Selma High back to the heights it reached back in its glory days when they were regular championship contenders. The Saints haven’t been back to the Final Four since 1988, and last year the team was unable to advance to regionals.

“The goal is always to get to Birmingham,” he said. “Right now, we’re setting our goals high as far as winning our area, competing for the area championship, getting to the regional tournament and moving on from there.”

The season tip-off has the student-athletes excited to get into game action. Team captain Korbyn Kelly is focused on leading his team in the right direction and said he has a good feeling about this season.

“I believe we’re going to go somewhere,” he said. “I feel really confident in my teammates.”

Facing a local rival like the Hornets in the first game has everyone on the team pumped.

“Oh, we coming,” Kelly said. “We’re ready for anybody. It doesn’t matter who it is, I know me and my brothers are ready.”