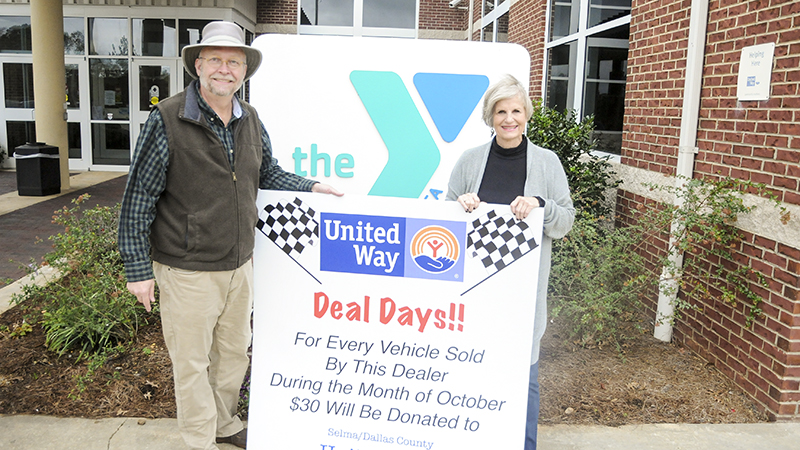 Jeff Cothran with the United Way and Ann Murray with the YMCA of Selma and Dallas County announce this year’s Deal Days fundraiser.

The United Way of Selma and Dallas County has started its annual Deal Days fundraiser to raise money for its agency partner the YMCA of Selma-Dallas County.

“The annual United Way Campaign has an annual fundraiser to raise money for our 15 agency partners that serve the people here in Dallas County, and the YMCA is one of our biggest partners,” United Way executive director Jeff Cothran said. “Our annual campaign funds all the programs at these different agencies, and we also invest in other areas in the community with the community dollars.”

YMCA of Selma Dallas County CEO Ann Murray has led the way in getting the dealerships involved. Turner Chevrolet, Reliable Cadillac GMC, Moore-Stewart Ford and Moore-Stewart Honda have all volunteered to contribute to the campaign.

“The Deals Day event that Ann and the YMCA have taken management for is a great event where car dealers have participated for many years now,” Cothran said.

Over the course of the month of November, four local car dealerships will donate $30 for every vehicle they sell to the United Way’s annual campaign.

“We want anybody who is looking for a car to buy locally because it helps all of us,” Murray said. “All of the owners of the dealerships are very much behind contributing to the United Way. It makes it fun for them, fun for the community and fun for us to be able to participate with them.”

As an agent of the United Way, the YMCA and the Dallas County community has benefitted from the collaboration. Monies raised by United Way go towards providing scholarships for underprivileged individuals and families, as well as offsetting some of the operating costs for the YMCA. Recently, they donated money towards the new soccer field.

“United Way is working with our agencies to make Selma and Dallas County a better place to live,” Cothran said. “All of these [programs] are building a better community, and we’ve been investing in programs to do that.”

The goal of this particular campaign is to raise as much money as they can by the end of November.

“Everybody just doing a little bit, adds up to be a lot,” Cothran said. “Now the auto dealers donating $30 per vehicle, it adds up. They may sell 100-150 cars in a month, so it could be a big amount of money.”

The United Way and the YMCA benefit from their symbiotic relationship, and so does the Selma-Dallas County area.

“I know I speak for the other agencies as well of how thankful we are for the support from the United Way,” Murray said. “None of us can do it by ourselves. Every non-profit is in a struggle to be able to provide for our community, and so what the United Way does helps us to be able to do that.”