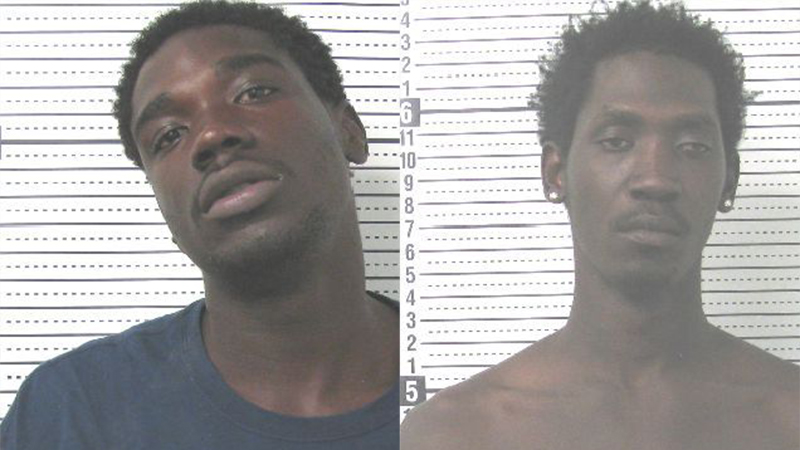 Derrick Antoine Posey, 24, and David Hollis Carter, 25, have both been charged with second-degree robbery. Their bonds were set Tuesday at $1 million apiece by District Judge Robert Armstrong.

The robbery happened around 8:25 p.m. According to Selma Police Chief Spencer Collier, Sgt. Michael Kiser was assigned to a surveillance detail in response to multiple robberies reported in the area over the last few weeks.

Kiser turned onto Broad Street and maintained visual contact. He then saw one of the men open the door of a green Nissan parked in front of the ATM at PNC Bank and climb into the back seat.

“Kiser then observed a third subject, later identified as the victim, begin to back away from the ATM with his hands in the air,” Collier said. “In fear for the victim’s life, Sgt. Kiser drew his service weapon while still in his vehicle and identified himself as a Selma police officer.”

Collier said Sgt. Jeff Hardy, who was also working the detail, assisted Kiser, and both suspects were taken into custody without incident.

The victim told Kiser he “saved his life.” The victim told investigators he had just completed a deposit when the two men approached him and demanded he drive them across the Edmund Pettus Bridge to his store to retrieve money.

Collier said no weapons were recovered, but the suspects’ movements led the victim to believe they were armed during the robbery. According to Collier, Posey and Carter admitted to demanding money and a ride from the victim.

“Sgt. Kiser’s attention to detail made the difference in this case. Good police work took these two criminals off the street before they got the opportunity to hurt someone,” Collier said.

The detail was a joint operation by the Major Crimes and Narcotics Units of the Selma Police Department.

“I am proud of Sgt. Kiser, Sgt. Hardy and all of the officers assigned to this detail,” Collier said. “We can’t always reveal to the public the steps we are taking to prevent crime in Selma, but I hope the community realizes that no one wants these criminals off the street more than us.”

Collier said the case is still under investigation, and they are trying to determine if Posey and Carter had anything to do with the six armed robberies recently reported in the downtown and Old Town areas.

Court records show Carter has a criminal history that includes robbery, breaking and entering and burglary. Collier said Carter was wanted on an outstanding burglary warrant.

Posey has no prior charges, according to court records.