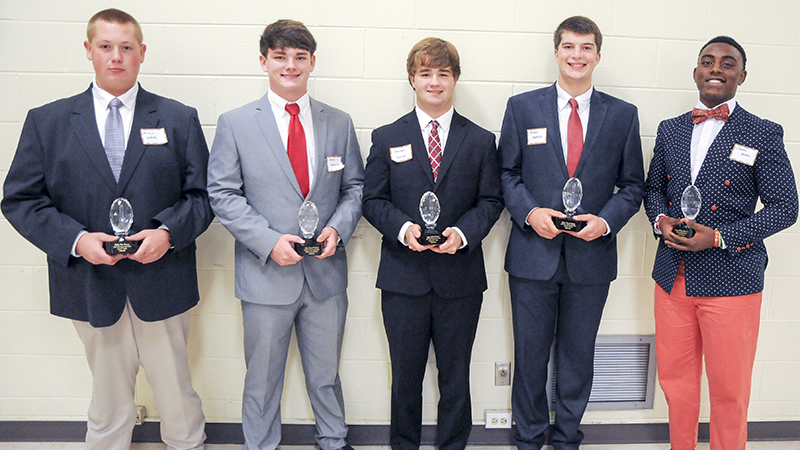 The Selma QB Club awarded five $4,000 scholarships to local student athletes Monday night at their second to last meeting of the year.

“The Selma QB Club was founded to give scholarships to athletes,” QB Club scholarship chairman Gus Colvin said. “We had about 75 applications this year and got our five winners out of that.”

“One of the biggest things we’ve seen this year was how goal-oriented all the winners were in what they want to do in life,” Colvin said.

After receiving their awards, the QB Club introduced the guest speaker for the evening, executive director of the Senior Bowl and Crimson Tide analyst Phil Savage.

Savage is returning to Selma after having spoken to the Dallas and Wilcox County Bama Club this past August before the season started. Now the Crimson Tide are 9-0, and this time Savage was speaking to a medley of SEC fans.

“It’s a little bit different when you’re talking to everybody, rather than just the Alabama supporters,” Savage said. “It was fun to be back in the same setting. I have a lot of respect for what the QB club does for the young people here in Dallas County.”

Before he dove into his speech for the evening, he congratulated the scholarship winners and offered them some advice. Savage told the recipients that they are moving on into a competitive collegiate environment, but they can get an edge if they are coachable, have good character, are competitive and show compassion.

Savage spent some time talking about his new book “4th and Goal Everyday”, which wasn’t released yet when he last spoke in Selma. He said he felt the need to write this book because this current era of Alabama dominance is one that will be remembered for ages, and he believes that head coach Nick Saban gets frustrated that people don’t fully understand the level of preparation it takes on a daily basis to maintain the success that the Alabama football program has had under his leadership.

Savage has known Saban for a long time and felt that through his book he could give an inside look at how the Saban and the Crimson Tide became the dominant program they have been over the last several years. He stayed awhile after his speech to personalize some of his signed books for club members who purchased a copy.

“When I was here in the summer, it wasn’t quite out yet,” he said. “It’s good to be able to be back here and push the book some.”

As far as the current season goes, Savage warned Alabama fans of the potential trap game coming up against Mississippi State. The Bulldogs have an athletic quarterback in Nick Fitzgerald, and the No.8 ranked defense in the country.

Savage opined that the Auburn Tigers are in a good position heading into the last three games of the season. Even though they face the No.1 Georgia Bulldogs this Saturday, Savage believes that will work in the Tigers favor. He said the similar blueprint between Georgia and Alabama will help Auburn prepare for the Iron Bowl.

He’s not completely sold on Georgia’s freshman quarterback Jake Fromm, and is skeptical that Georgia can continue to win without exceptional quarterback play.

The Selma QB Club will have their last meeting next Monday, Nov.13 at 6 p.m., and SEC associate chairman Charlie Hussey will be the guest speaker.