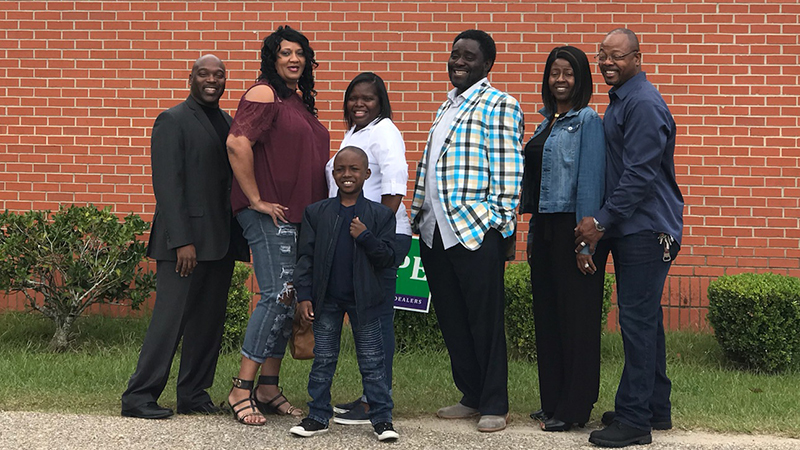 The pre-kindergarten students at Salem Elementary School in Orrville were excited when they found out that eight new computers were donated to their classroom by alumni from Keith High School on Oct. 27.

“The [students] were, and still are very excited,” Salem Elementary School principal Chinita Irby said. “Their classroom did not have a computer that was accessible for them.”

Members of Keith High School’s class of 1987 and 1988 ran a fundraiser over the summer to give back to the local elementary school and wound up raising $1,500.

The fundraiser was initiated by Velma Reese ’88 and her husband Warrent Reese ’87. They spread the word and were able to get some of their classmates to help them with their cause. Dorothy Turner, Orlando McNeil, Patricia Satterwhite, Bessie Small Wallace, Greg Young, Eddie Dragg and Lonzy Cliffton also helped setup the fundraising walk.

“After speaking to the principal, Chinita Irby, and learning that there were only two computer tablets among 30 children in the Pre-K classes at Selma Elementary in Orrville, this graduating class… hosted a 2-mile walk fundraiser at Keith High School in June,” Velma stated in an e-mail to the Times-Journal. “Today’s children are born into a tech-savvy world, and they need to be exposed to computers as early as possible.

The proceeds not only covered four Dell computers, three Lenovo computers, and a Flatron computer but also an additional $400 to cover the end of the year field trip to the Montgomery Zoo.

“Words cannot express how thankful and how grateful we are,” Irby said. “To learn that these were alumni classes that thought enough about the students and wanted to give back to the community that they grew up in is phenomenal.”

The Keith class of 2010 has also stepped up for Salem Elementary, and are going to have a coat drive for students in need on Monday, Nov. 6 at the school.

“They are creating opportunities that some of our children would never otherwise have,” Irby said. “I know the need that is in this community, and for others that’ve lived here to want to come back and give is amazing.”