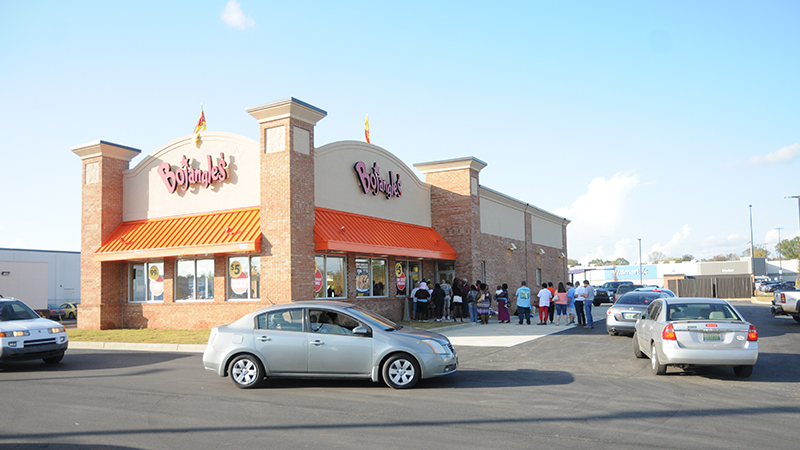 Lines of people and cars wait outside Bojangles’ Famous Chicken prior to the restaurant’s opening Friday afternoon.

Customers stood outside and waited in the drive-thru line for more than 30 minutes in anticipation for the grand opening of the new Bojangles’ Famous Chicken ‘n Biscuits on Highway 80 in front of Walmart on Friday afternoon.

“We’re really excited about getting started,” franchise owner Pat Landon said. “We’re a little late getting open, but we’re excited. We love the city of Selma, and people have been great to us here.”

The opening was scheduled for 4 o’clock, but was delayed due to some additionally required construction inspections Landon said.

The doors officially opened at 4:23 p.m. and crowd rushed inside to place their orders.

The line packed up the entrance way and extended outside for the first 45-minutes the restaurant was open.

“We have very high expectations,” Landon said. “We feel great about the community. We’ve got a great location sitting in front of Walmart, and we feel like we bring something unique to the city. There are other chicken concepts but not with our recipes.”

As the day went on, business continued to boom on its inaugural day.

The drive-thru line wrapped around itself and the dine-in customers kept on coming.

The new Bojangles hired 40 employees to get started, including a management team consisting of people who are from Selma, Landon said.

“We’ve got a great management team, and all of them are from Selma,” he said.

The first customer in the drive-thru line had never been to Bojangles before but wanted to try it out after she learned of the opening this past Thursday.

Several customers who’ve had Bojangles in the past at other locations were just as excited to have a location come to Selma.

“We’re glad to have the business,” Debra Blocton said. “I was glad they came to Selma. They have good food.”

Blocton was the second customer in line along with her friend Jackie Montgomery. She got in line at 3:40 p.m. and held her spot until she got her two-piece dinner with coleslaw and sweet potato pie.

Montgomery had left the line, but Blocton convinced her to turn her car around and come back.

“I turned around and came back because I wanted to try their chicken because I had it in South Carolina and Tennessee and it was good,” Montgomery said.