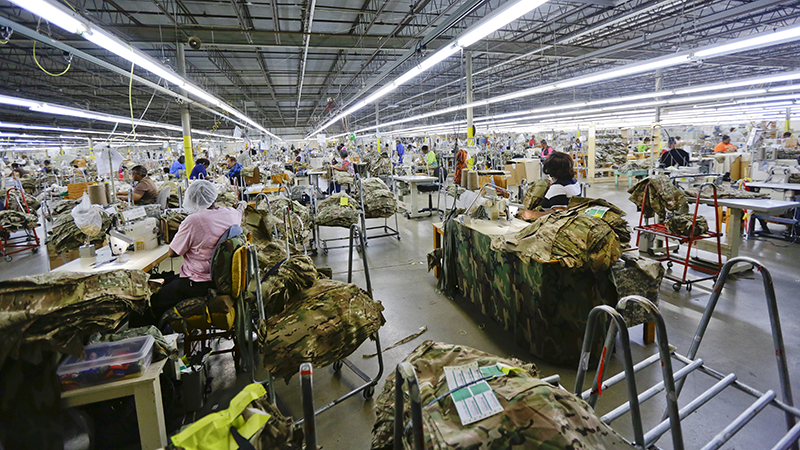 American Apparel has been awarded a $48 million contract to produce combat utility uniforms. Head of manufacturing Chuck Lambert said the contract would help the company’s Selma plant as well as those in Opp and Centre.

According to Chuck Lambert, head of manufacturing and operations, the announcement was made last week.

“We take a lot of pride in the fact that when they put that uniform on that it’s made here in Alabama,” Lambert said. “It’s made with a lot of pride, and we hope that continues to be the case for years to come.”

The contract is for a maximum of $48,411,186 and is for five years, Lambert said. It is an 18-month base contract with one 18-month and two one-year option periods, according to a news release from the company.

Lambert said the uniform is the basic everyday utility and combat uniform worn by men and women in the United States Marine Corps.

American Apparel was founded in 1987 and is an industry leader in manufacturing uniforms for all branches of the United States military.

“We have been a very diversified maker of combat uniforms. We started here in Selma in 1987, and we pride ourselves on delivering a good product,” Lambert said. “We’re probably the most diversified combat utility uniform maker for the Department of Defense. We have produced Army combat uniforms, MCCUU uniforms, Navy work uniforms, the Airmen’s battle uniform as well as the Marine Corps frog uniforms all here as well as the old BDUs, which is what the company was founded on.”

Lambert said this is the fourth or fifth contract they have been awarded from the Marine Corps, and it says a lot about the company’s work to continue getting the contract.

“This is the fourth of fifth contract on that product as a follow-on contract, so we’ve done them a great job I think over the last 15 or so years,” Lambert said. “I think it’s obviously the quality, the price and the delivery of a good quality product for our Marines.”

Lambert said the contract not only helps its Selma facility, which employs around 250, but it also helps the company’s other facilities in Opp and Centre, which employ around the same number.

“We’ve got those in the pipeline, and we’re hoping to be successful in those awards as well,” Lambert said. “If we do, those products will be made both in the Selma and Opp facilities.”

“They’re dependent on government contracts, so every time one of those happens it just secures those jobs,” Vardaman said. “They are recognized in the military contract industry as being one of the preferred suppliers of military uniforms. They’ve got a great reputation and always have.”