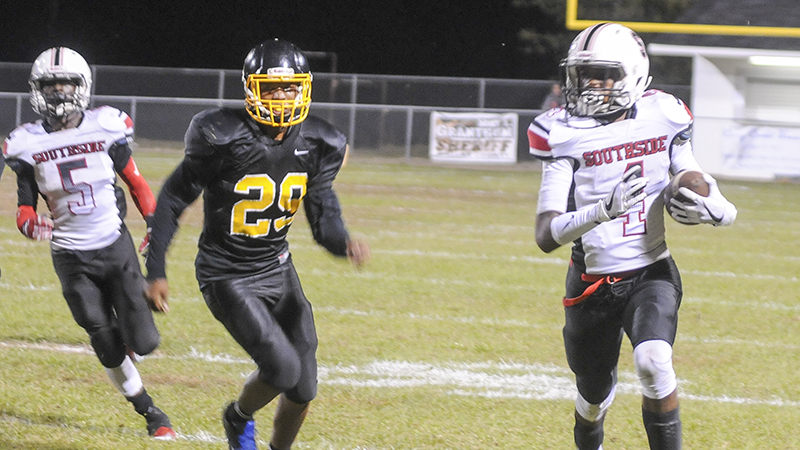 Southside receiver Keshawn Arrington runs sweep to the sideline in the Panthers 57-0 win over Ellwood Christian on Thursday night.

The Southside High School Panthers (7-3) finished off their regular season schedule with a 57-0 win over the Ellwood Christian Eagles (0-9) on Thursday night.

Neither team had anything to lose in this game as the Panthers were already locked into the playoffs, and the Eagles remained winless on the season.

“Anytime you get a shutout on somebody heading into the playoffs, that’s good,” Panthers head coach Daniel Flowers said. “It gives us good confidence.”

Even though the game was played at Southside, the Eagles were officially the home team for the game. Southside still had the home field advantage with the larger number of fans in attendance and their own band playing music throughout the game.

The Southside defense has forced shutouts in back-to-back games. They recovered an Eagles fumble in the second quarter, and stopped Ellwood on fourth down on their only trip to the red zone during their final possession of the game.

The Eagles played a tough game, but were unable to sustain drives offensively. Assistant coach Ray Blanks led the team in the Eagles final game of the season.

“We came out with a good start, but the boys got tired and worn down,” he said. “I had a strong team. None of them quit. They came to practice each day and fought… The next step from here is teaching them how to get better.”

Southside’s offense was operating cleanly throughout the game, and scored at least once in each quarter of the game. Panthers quarterback Malik Johnson had three passing touchdowns and a rushing touchdown as well.

“Ever since the Montgomery Academy game, Malik’s been playing some good football,” Flowers said. “He’s doing a good job taking care of the ball. He runs when he supposed to run, and he throws when he’s supposed to throw it so he can get everybody the football.”

Johnson scored the first touchdown of the game on a nearly four-minute opening drive to give the Panthers a 6-0 head start.

The Panthers scored three times in the second quarter to expand their lead to 28-0 before the half. Johnson connected with Derrick Griffin for a 29-yard touchdown reception, and hit Keshawn Arrington with a 41-yard pass play on the next drive for a touchdown. Johnson’s second rushing touchdown was the last score before the half.

Southside started the third quarter quickly with two offensive touchdowns just 14 seconds apart. Tony Sullivan scored on a jet sweep, and then Southside got the ball back immediately. Johnson completed his third touchdown pass to Rickey Webster to stretch the lead to 42-0.

Webster also scored the last touchdown of the third quarter on a short 5-yard run. The two-point conversion by De’Sharrio Anderson gave the Panthers a 50-0 lead before the fourth quarter.

The two teams played the full time of the game without a running clock so that some of the younger players would get some playing time according to Flowers.

The decision worked out for the Panthers as eighth grader Chris Thompson scored on a 28-yard touchdown run for the final score of the game.

The Panthers will play in the first round of the playoffs next Friday against the Clarke County Bulldogs (7-2) in Grove Hill.

“I know we probably won’t shut Clarke County out,” Flowers said. “But let’s fight like we fought tonight.”

The Dallas County Hornets (2-8) defeated the Billingsley Bears 30-14 in their final game of the season.

“It feels good to get a win, especially for the seniors going out in their last game,” Dallas County head coach Cliff Matthews said.

The Hornets offense had been struggling through the season, but were able to establish their running game against the Bears.

Dallas County running back Calvin Starks rushed for three touchdowns, and quarterback Octavious Palmer also had a rushing touchdown in the game. The team did not make the playoffs, and their season is over.