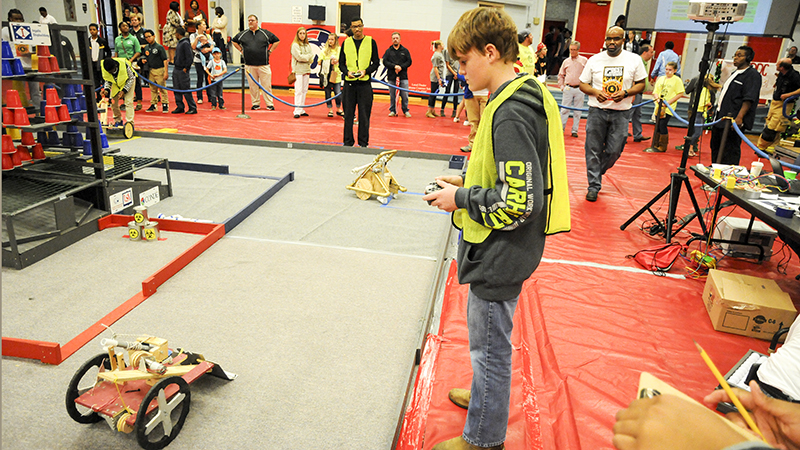 Teams competed in the “Cross-Fire” fire rescue simulation challenge using robots they built, while their classmates, bands, and cheerleaders encouraged them from the bleachers.

“This culminates six weeks of intense development and planning for teams throughout Dallas County and our region,” Selma BEST hub director Johnny Moss said. “They worked to develop a marketing presentation, exhibit booths and an actual robot to compete in this competition.”

All three schools will represent the Selma BEST hub at Beard-Eves Memorial Coliseum for the Regional Robotics Championship at Auburn University on Dec. 2-3.

The controllers had to maneuver their robot in their designated section to pick up Manny the mannequin and return it to safety. Then they must load plastic golf balls onto their robot and attempt to shoot down as many cups as they could to simulate putting out the flames with water. Lastly, the robot must remove the hazardous waste cans from the hot zone and move them to the safe zone.

Dallas County senior Tyler Duncan and his teammates built a robot that operated smoothly through the simulation course. Aside from a minor battery issue, he said that their robot was working well in the competition.

“The excitement level is really high,” Duncan said. “It took a couple hours staying after school every week or so and it took about two months to build. But we all cooperated well together, and we all put our own little time in each part of the robot. We made it where we can compete well in the competition today.”

Each robot was guided by one student team member with a wireless controller, while another assisted with loading and unloading the robot in between tasks.

During the lunch break, Stover worked with his team of students to almost completely rebuild their robot.

“This year, we had all new students mainly in junior high, and it’s been a learning curve,” he said. “It’s been a learning experience for them. It’s their first time using tools, measuring, learning how to use a ruler and engineering the whole process of design.”

In the stands, supporters from each school cheered on their classmates with vuvuzelas, whistles and anything else they could use to make noise.

Just outside the gym, several schools set up tents for the other portion of the competition. In congruence with the fire rescue theme, several teams from each school setup informational tents with mini-games to spread awareness about fire safety and the importance of first responders.

“I’ve really learned how to work together as a team and become a better leader,” Matthews said. “I’m really getting into STEM, because I want to go into medicine. I feel like this as a good learning experience for that too.”