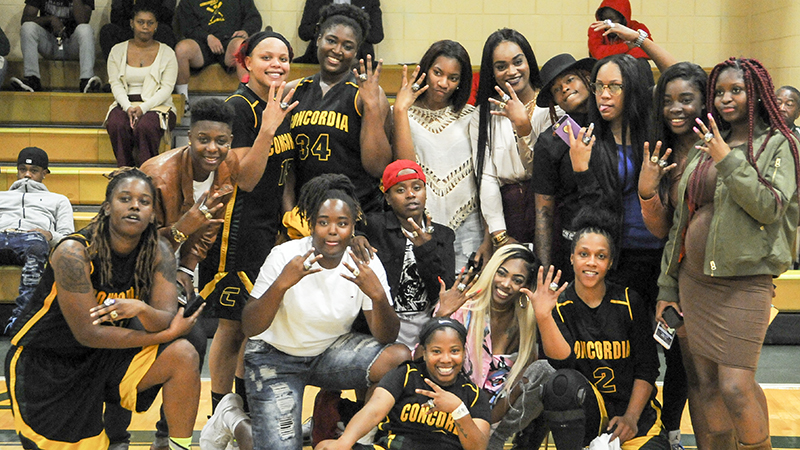 The reigning USCAA national champion Lady Hornets defeated the Patriots 87-58, and the men edged out an 86-84 win in overtime.

It was a special night for the Lady Hornets who received their championship rings after the win. Current players were joined by their former teammates to celebrate their accomplishments together one more time.

“That’s the great part about it,” Lady Hornets head coach Howard White said. “It was very special last year to make that run through the national tournament… To me [tonight] was about the celebration of the ring ceremony.”

The Lady Hornets were ahead the entire game, and were only outscored by the Patriots in the second quarter. The 12-point second quarter was the worst scoring quarter for Concordia College, as the team put up more than 20 in the other three quarters.

Rayneseya Brown led the Lady Hornets in scoring with 22 points, and Teondra Crawford finished the game with 14 points.

The Patriots were able to score 23 points in the fourth quarter, but it wasn’t enough to cut into the increasing deficit. Mychel Jackson and Jalisa Torrance both had 16 points to lead the Patriots in scoring.

Not only was it a big victory for the Hornets men in their home opener, but it was the first home win for their new head coach Andre Williams.

“This is the first time all of us have been together,” he said. “It’s a whole new team from last year, so they’re excited for their first win.”

The men’s game took a while to develop, but both teams battled to keep the game alive. The Hornets had the lead for the majority of the first half, but the Patriots were never too far behind. Patriots guard Carlton Osborne hit a three-pointer with 2:10 left in the half to give his team their first lead of the game.

In the final seconds of the first half, Quindravius Gibbs hit a three-pointer from the corner to give the Patriots the 34-31 at halftime.

The second half played just the opposite of the first. The Patriots led for the majority of the period, but could never pull away. Both teams were in the bonus with under five minutes left in the game, but Concordia went five-for nine from the free throw line and left the door open for the Patriots.

Osbourne hit a big three-pointer with 30 seconds left to get the Patriots back within one. Concordia only made one foul shot on the next possession, and Kenan Grey was able to tie the game with a put-back layup with three seconds left to force overtime.

There were five lead changes in overtime, but the Hornets were able to pull off the victory.

“It was a tough game,” WCCS men’s head coach Duane Evans said. “I don’t think we played our game on the defensive end. When you don’t play good defense, rebound the basketball and turn the ball over, you’re bound to lose tight ball games.”

The Hornets were led in scoring by Joe Barnes with 17 points, followed by Ty Oaks with 16.

Osbourne led the Patriots in scoring with 23 points in the game, including six three-pointers.
“We had a freshman in Dreshaun Jones who stepped up big for us, and hit some clutch shots,” Williams said. “But I think our inability to shoot free throws to close them out kept this game exciting.”