ConnectHomeUSA “is a movement to bridge the digital divide for public housing residents in the United States under the leadership of national nonprofit EveryoneOn.” 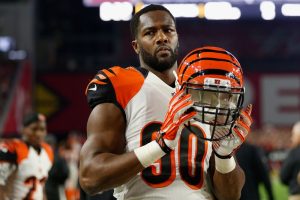 Cincinnati Bengals defensive end and Dallas County alumnus Michael Johnson will serve as an ambassador for a program to put internet into public housing.

EveryoneOn chose Johnson as their first ambassador not only because of his high-profile as an NFL athlete, but also because of his commitment to giving back to his community, according to the non-profit’s CEO Chike Aguh.

“We heard not only about Mr. Johnson’s work in the community and his desire to give back, but also his particular interest in technology, the internet, computers, software and its ability to not just make a lot of people in Silicon Valley and New York City money, but it’s ability to actually help folks who maybe in modest means and can actually change their lives.”

Johnson wasn’t able to make the trip to D.C. due to an injury he sustained during this past Sunday’s game against the Indianapolis Colts, but he will still make a virtual appearance via Skype to show his support.

“This really speaks to Mr. Johnson’s commitment towards this cause,” Aguh said. “He was really moved by this cause, and quite honestly, it shows his commitment to his cause that he’s going to still be with us even with the injury that he sustained.”

Thomasene Johnson, Michael’s mother and president of the MJ9390 foundation, will be in D.C. on behalf of her son and the organization.

“I believe that this is an excellent opportunity for us to be able to join with this group, so that we can reach some very important children who are definitely our future,” Thomasene said. “By partnering with [EveryoneOn], we’ll be able to reach more children and more adults as well. I think it’s important that we have that ability not only for jobs, but for education and just for general living.”

The program launched in 2015 in 27 cities and one tribal nation. So far, they have led more than 200 digital literacy training sessions, provided more than 7,000 devices and connected more than 20,000 people with at-home internet service. According to their website, connecthomeusa.org, nearly 90 percent of residents retained their ConnectHome internet connection and became aware of free computer classes in their area because of it.

Their current goal is to provide internet access to 350,000 residents and be involved in 100 communities by the year 2020.

ConnectHomeUSA is already in Tuskegee, and the group plans on adding 30 cities each year moving forward.

“The great thing about ConnectHomeUSA is that next year we’ll be taking on 30 more cities, and the year after that we’ll take 30 more,” Aguh said. “So, if Selma is not there this year, there’s no reason it can’t be there next year.”