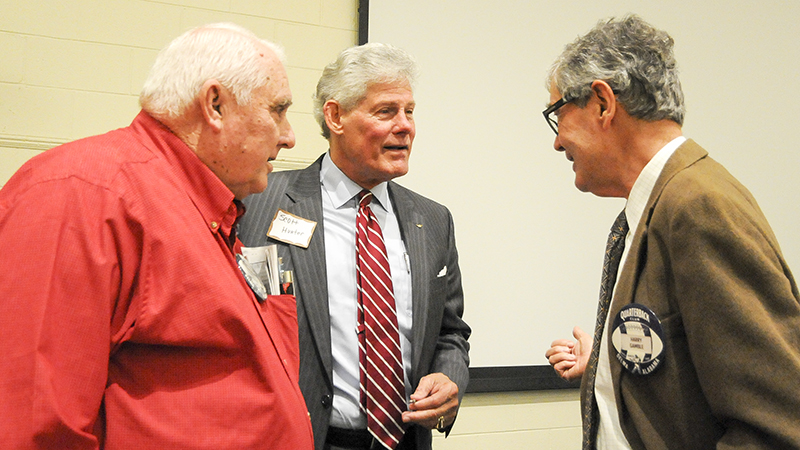 Former University of Alabama and NFL quarterback Scott Hunter flew his 182 Cessna 56 minutes from the Brookley Aeroplex at the Mobile Downtown Airport to come and speak to the Selma QB Club on Monday night at the Carl Morgan convention center.

Hunter, an Alabamian from Mobile, played for the Crimson Tide under legendary head coach Paul “Bear” Bryant from 1966-1970. He spoke to the QB club about how it was being on a Bear Bryant team and what he learned from him.

“As the years go by, you realize how special [Bryant] was as a coach,” Hunter said. “I talked about the intangibles, and that was what he was such a genius at. He figured out what your button was and he pushed your buttons.”

Hunter shared that in his time playing at Alabama he learned that he could never get caught in a single moment, but always be looking ahead and preparing for what was next. He recalled coach Bryant and his predecessor Ken Stabler always thinking of the next move or the next play. As a freshman, Hunter had a front row seat to watch the preparation it took to win college football games.

When he got his chance as a starter, he learned his lesson in humility. He shared several anecdotes of how he was humbled during his playing days, which the QB club found very entertaining.

Most importantly, Hunter said that coach Bryant taught him and his other teammates how to be mentally tough. The best advice he remembers hearing from his former coach was to “run the best thing you’ve got.” That message stuck with Hunter both on and off the field.

He said that coach Bryant placed a lot of responsibility on his quarterbacks, and wanted the team to have absolute confidence in their leader.

Hunter was a charismatic speaker, and kept the QB club members laughing throughout his speech.

“This was great,” Hunter said. “Everybody in here knows football, so you’re not talking to people you have to explain anything to. In fact, probably a lot of these guys in here could explain something to me about football.”

He spoke highly of this year’s Crimson Tide football team and has been highly impressed by the defense’s athleticism. He told the QB club that the upcoming games against LSU and Auburn will be the main tests for Alabama’s offense for the rest of the season.

Hunter said the only way teams are going to have a chance at beating the Crimson Tide is by loading the box and challenge Hurts to remain in the pocket and throw the ball down field.

When addressing Nick Saban, Hunter referred to him as the “internet-age version” of Bear Bryant. He said that what makes Saban special is that he’s always recruiting. Even after a win, Saban is thinking ahead and working recruiting angles on whomever he can.

Next Monday, Nov. 6 is going to be scholarship night for the Selma QB Club, and the guest speaker will be Phil Savage.