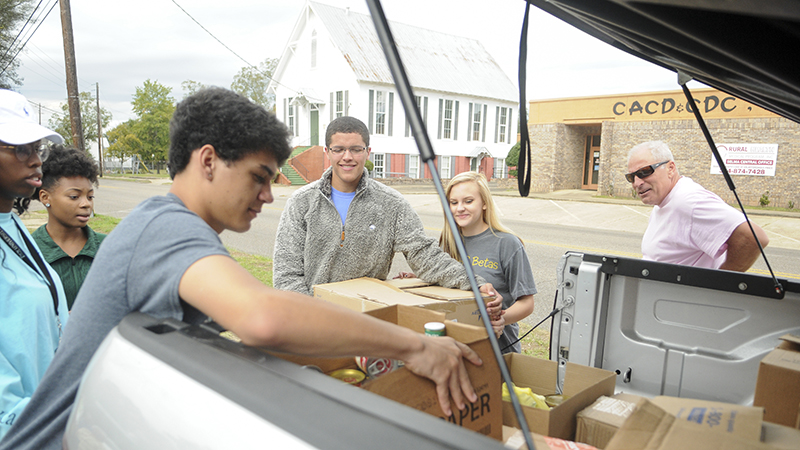 Nancy Bennett, a COA board member and organizer of the campaign, said nearly 3,500 cans had been collected with around two hours left. Volunteers were out at 7 a.m. collecting food and money.

“It has gone very, very well,” Bennett said. “It was a slow morning up until about 10 a.m., but it has been quite steady since then.”

Morgan Academy students dropped off more than 3,000 cans, and Bennett said other schools like Clark and Knox Elementary Schools have also pitched in. She said other schools were still holding canned food drives and were planning on donating the food in November.

“Whether it’s one can or a carton load, or whether it’s $100 donation or a nickel, it’s more than what we had, and we’re just blessed because it carries on our mission,” Bennett said.

So far, she said all of the cans collected weighed an estimated 3,270 pounds combined. Bennett said they also collected a couple thousand dollars in cash donations to help purchase even more food.

“It’s over a ton of food,” Bennett said. “Actually, it’s over a ton and a half of food, and that is going to certainly help us. That means it’s something we don’t have to purchase.”

The food pantry serves a total of 1,337 people, which she said is 644 families. Around 250 bags of food are given out there each week to people with around 8.5 pounds of food in each one.

Bennett said they also try to give some extra when they can.

“I didn’t even know this place existed. I’ve seen it, but I didn’t know about it,” she said. “It amazes me with all the cans and things that people do for other people.”

Bennett said the Beta Club members were a huge help in unloading donations and getting them inside the food pantry.

“Most of our volunteers are 50-plus, so to have the young people help us is great because they’ve got more energy and agility,” Bennett laughed. “They worked like church.”

The Stock the Shelves campaign is the food pantry’s only fundraiser of the year, but Bennett said they can take donations any time during the course of the year.

“It doesn’t have to be right now,” Bennett said. “We’ll take it any time. The board members and the Wednesday and Thursday volunteers have just been great to help, and we’re blessed.”

She encouraged people to continue to make donations and drop off food. Even though around 3,500 cans were collected Friday, she said that food would only last through sometime in November.