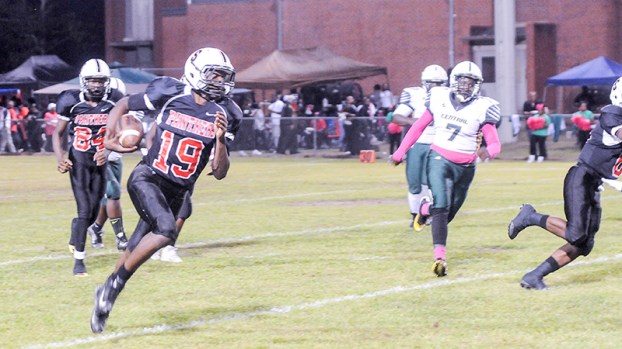 The Southside Panthers struggled all night to contain the Central Hayneville Lions offense, but they stepped up and didn’t allow a single positive yard on the first possession in overtime.

Southside quarterback Malik Johnson capped off his huge performance Friday night with a 10-yard sprint up the middle on first and goal to give the Panthers a 52-46 homecoming overtime victory.

“You’ve got to win a game like this,” Southside head coach Daniel Flowers said. “These two, 3,000 people came out here to see us win. They didn’t care how, as long as we win. We did it for them.”

The Southside fans that filled the stands and overflowed the parking lot were given a show to remember, as the action was non-stop. Southside had seven rushing touchdowns, two interceptions, a fumble recovery and forced a safety. Johnson had three of the rushing touchdowns himself as he helped carry his team to victory.

“[Malik] just finds a way to make plays,” Flowers said. “He’ll make a bad play, then come out and make two good plays. As a coach, you have to live with something like that.”

The Lions had several huge plays of their own including four passing touchdowns, two rushing scores two interceptions and an onside kick recovery.

Lions quarterback Keegan Blackmon threw three of his touchdowns in the first half of the game. The Panthers tried to keep it close, but sloppy plays at the end of the second quarter were costly. The Panthers tried to capitalize on Jaylen Colvin’s interception at their own 25-yard line. Unfortunately, Johnson tried to go deep and it backfired when Lions defensive back Eric Gordon intercepted the pass and returned it for a touchdown at the end of the half.

In the second half, the teams battled back and forth putting points on the board. Late in the fourth quarter, the Lions recovered an onside kick and drove the ball down the field for a touchdown and a 46-44 lead.

Southside had under two minutes left in the game to drive the ball 72 yards. Johnson led an amazing drive down to the Lions six-yard line, but his pass on first and goal was intercepted on the two-yard line.

It seemed as if the game was over, but the Lions got a holding penalty in their own end zone which forced the game into overtime tied at 46.

The crowd went crazy knowing that the Panthers still had a chance to win. Southside took advantage of the safety that saved their homecoming, and escaped with the win.

“I guess we need to go to overtime for the rest of our games,” Flowers said. “We’re 3-0 in overtime. These boys fight.”

The Keith High School Bears escaped Uniontown with a 38-30 win against the R.C. Hatch Bobcats on Friday night.

“It was their homecoming, and they’ve never beaten Keith,” Bears head coach Harry Crum said. “They were hungry for a win.”

The Bobcats were threatening in the red zone with time running out in the fourth quarter, but the Bears defense held with a goal line stand at the three-yard line to end the game.

Keith will have a region match at home next Friday against Thorsby.

“It’s our homecoming next week and we’re going to be trying to play for outright second place in the region,” Crum said.

Selma High falls on the road at McAdory

The Selma High Saints lost 28-6 on the road against the McAdory Yellow Jackets on Friday night.

The Saints were unable to execute on offense, according to head coach Christopher Raymond.

“We forced turnovers, but we just couldn’t capitalize on them,” he said. “We couldn’t establish anything offensively and we struggled.”

The Saints only score came on a 55-yard touchdown pass from Tyreshon Freeman to Rondarius Sanders in the third quarter.

The Saints are now 1-4 in region play, and their last region game is next Friday against Hillcrest Tuscaloosa.