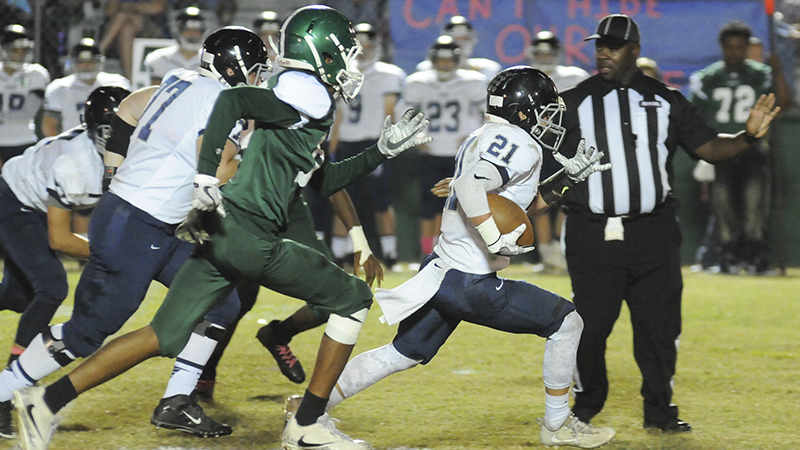 Jemison’s Adrian Jackson runs from a Dallas County defender Friday night in the Panthers’ 49-28 victory over the Hornets.

A gutsy onside kick late in the first quarter led the Jemison Panthers (3-5) to 28 unanswered points in a 49-28 victory over Dallas County (1-7) Friday night in Plantersville.

The Hornets got off to a fast start on offense scoring 14 straight, but it wasn’t enough to hold off a hungry Jemison team coming off a four-game losing streak.

Midway through the first quarter, Dallas County struck first with a 12-yard touchdown pass from Octavious Palmer to Hunter Skinner to make it 7-0, Hornets.

Eager to answer the bell, the Panthers fumbled the ball away, and Dallas County’s Kenchavious James jumped on it on their own 16-yard line.

Palmer’s second touchdown on the night came on the next play.

He found James on a short pass, who took it 84 yards to the house for a touchdown putting the Hornets up 14-0. 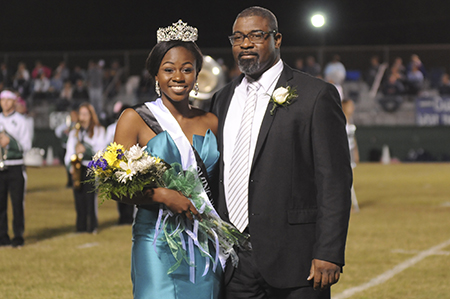 The Panthers finally found their footing on offense and drove the ball 70 yards. From 29 yards out, Jemison’s Eric Evans found the end zone for a touchdown.

Instead of kicking off, Jemison head coach Van Clements called an onside kick, which stole the momentum and a homecoming victory away from the Hornets. The Hornets looked to recover it, but it slipped through a player’s hands and Jemison’s Sawyer Smith came up with it.

A 5-yard touchdown run from Adrian Jackson on a toss sweep put the Panthers within one, 14-13.

Dallas County was forced to punt the ball away, and Jemison capitalized. Several plays later, Evans carried a pile of defenders on his back into the end zone with him for a 12-yard score making it 21-14. Jackson added the 2-point conversion.

“It was huge,” Clements said. “Some people think I’m crazy, but we do practice it every day, and those guys know the importance of it. They know when we call it we’re about to change the momentum. You couldn’t ask for a better opportunity right there”

The Jemison defense came up big on Dallas County’s next possession. As Palmer dropped back, he was sacked and fumbled the ball. Smith came up with a second fumble recovery on the night.

Evans scored his second of four touchdowns on the Panthers’ next possession. This time, it was from 14 yards out, giving Jemison a 28-14 lead to take into halftime.

Dallas County’s defense forced a Jemison punt to start the half, giving them a much-needed scoring opportunity. The Hornets drove the field and scored from 12 yards out with a Palmer pass to Se’Vaughn Brown to cut the lead to 28-20.

Jemison’s next drive chewed up most of the clock in the third quarter and put more points on the board. Evans found the end zone again on a 1-yard run stretching the lead to 35-20.

In dire need of points, Dallas County turned the ball over on downs after a fourth down completion that fell shy of a first down with 10:35 left in the game.

Jemison extended the lead again to 42-20, but this time it was on quarterback keeper from Daniel Martin.

With just 37 seconds left in the game, Palmer tried to make a play but threw it to the wrong man, resulting in a pick six for Jemison’s Drue Moore. That made the score 49-20.

Dallas County cut the 29-point lead to 21 with eight seconds left to go in the game. Palmer found Brown streaking down the right sideline for a 29-yard score to make it a final score of 49-28.

Clements said his team has been plagued by turnovers all season, but the tables were turned Friday night.

Jemison will visit Demopolis next Friday, and Central Tuscaloosa will make the trip to Plantersville to play the Hornets on Senior night.