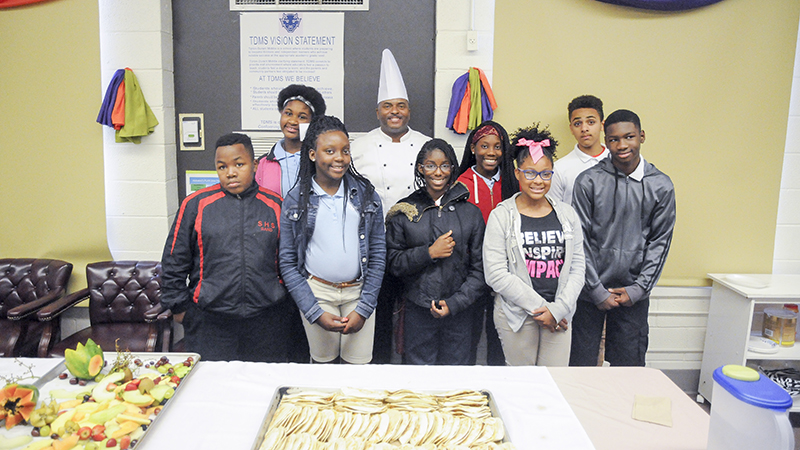 The students at Tipton Durant Middle School were treated to a special and tasty presentation courtesy of the Edmundite Missions and the Bosco Nutrition Center on Wednesday morning.

“This was to teach the kids about nutrition and also the career factor that outside of just cooking food there is a career behind it,” Harris said. “It gives them an education of what they could be.”

Harris wanted to host the event so that kids would understand that there’s more to food service than cooking and putting it on a plate. He presented them with an opportunity to hear from a real chef about what goes on behind the scenes to make everything possible.

Tipton principal Jackie Averhart was glad to have Harris and Dominick put on the food presentation at her school because she wants her students to be thinking of potential career options.

“One thing we all have in common is that we all eat,” Averhart said. “The students need to look beyond eating as just being about food or someone cooking. They need to see it for what it really has the great potential to be.”

She said that the students who came to the presentation had expressed an interest in eating healthier and learning about the etiquette of food preparation.

“It was a great experience,” she said. “We were just so excited about today.”

This isn’t the first-time Tipton and the Edmundites have collaborated for student outreach programs, but this was the first presentation that was about food.

Dominick put on a cooking demonmstration for the students, and showed them how to layout a fruit display and make a variety of quesadillas. He prepared vegetarian, chicken and s’mores quesadillas to show the kids a simple recipe that even they can prepare for themselves and their families.

“It’s something that they can bring home to their parents and say this is what I learned from school,” Dominick said.

According to Harris and Dominick, the students were very interested in learning about the different ways to prepare such a simple and healthy food item.

“It’s about educating the kids about food,” Dominick said. “Getting them excited about food and maybe they can explore the career that I’ve chosen to go through in the culinary arts.”

Chef Dominick is used to dealing with teaching adults, but he was excited at the prospect of informing the younger generation about healthy eating habits and opportunities in the culinary world.

“Usually I’m dealing with adults all the time and they’re already programmed,” he said. “But if you catch them a little younger and expose them to the proper food to eat, then maybe we can change their adult path on food.”

Dominick also brought the students a fruit display, and talked to them about food presentation as well. He had an assortment of pineapples, grapes, kiwi, honey dew and many other fruits displayed for the children. At the end of the presentation, there were still more quesadillas left than fruit.

Learning about the fruit display was seventh-grader Alisha Johnson’s favorite part of the presentation, but her favorite item was the s’mores quesadilla because they were sweet.

Johnson said she enjoyed the whole presentation, and discovered that food service was a career choice she could be interested in.

“It’s good to learn how to cook, and the first thing [Dominick] said was to ask 1,000 questions,” Johnson said.