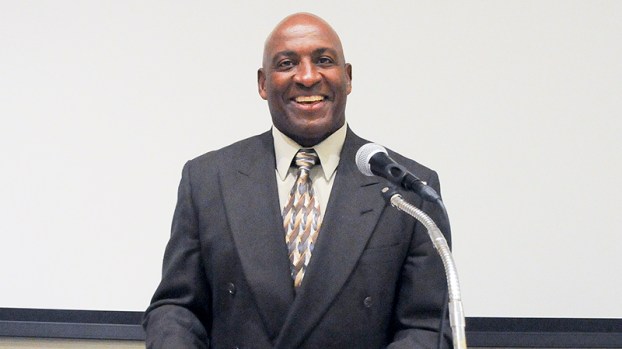 Cribbs is an Alabama native from the small town of Sulligent near the Mississippi border.

The former Auburn Tiger running back shared his journey from his hometown with one traffic light and one caution light to his rookie year with the Buffalo Bills.

He went from being the last kid picked on the playground to give the teams an even number, to being the one everyone was waiting for to make the first pick.

Cribbs started playing organized football in sixth grade, and just a year later he was called upon to play defensive back on varsity.

Cribbs said that he excelled at multiple sports in high school. He ran track and also played basketball, but football took him to Auburn.

He wanted to go to where he felt he could play early, and he thought that he could be the back to spark the Tigers through their rebuilding seasons.

According to Cribbs, he reached his low-point during his freshman year when he was back in his hometown at a high school football game getting questioned about why he wasn’t with the Auburn Tigers for their road game in Arizona.

He was still on the freshman team, and hadn’t made the cut to be on the travel unit for Auburn.

After that experience, Cribbs’ uncle told him that he needed to start treating his practices like games and that motivation was enough to push Cribbs to another level.

Soon enough, the defensive coach was telling the offensive coaches that the team’s best running back was on the practice squad.

In his freshman year, Cribbs gained 171 yards on 43 carries. In his first game, he nearly ran back a kick for a touchdown, but a back-pedaling referee tripped him up.

In his final season with Auburn he rushed for 1,120 yards on 200 carries and scored 14 touchdowns.

The productive running back was drafted in the second round of the 1980 NFL Draft by the Buffalo Bills with the 29th overall pick. He was the fifth running back taken and still remembers each of the running backs drafted before him.

Billy Sims, Curtis Dickey, Earl Cooper, Vagas Ferguson and Charles White were all selected in the first-round, where Cribbs thought he was going to be taken.

Cribbs fielded questions from the QB Club about some of his memorable moments during his playing career, but he most thoughtfully answered on the tougher topic of the dangers of playing football.

Cribbs said that even though he loves football and knows how good it’s been for him, “the human body is not made to play football.” Cribbs, 59, said that if he knew what he now knows about football and its potential long term health risks, he wouldn’t have let his kids play football.

After seeing the effect it’s had on people that he’s known and friends that he’s lost, Cribbs warned that football is changing.

“I think parents really need to take a real serious look at football,” he said. “Once they start down that track, it’s pretty hard to stop… All I want them to do is open their eyes and think about things.”

His good friend Reginald Gipson, another former NFL running back, who came to the QB club meeting with Cribbs in support broke his neck from a football related injury.

Both he and Cribbs were plaintiffs in the lawsuit against the NFL for concussion related injuries received after playing.

“For me, I love playing football, and I can’t say that if I had to go through everything over again I wouldn’t do it the same way,” Cribbs said. “But if I knew what I know now, I wouldn’t.”

Cribbs enjoyed speaking to the QB Club and he said he felt comfortable doing so.

“The group made me feel very much at home and welcome,” Cribbs said. “They encouraged me to talk about some of the things that I wanted to talk about, and I felt like I hit on some of those things.”

The QB Club’s next meeting will be on Oct. 30 at the convention center, and former Green Bay Packers and University of Alabama quarterback Scott Hunter will be the guest speaker.

TUSCALOOSA (AP) — Damien Harris opened with a 75-yard touchdown run and No. 1 Alabama rode a fast start to... read more