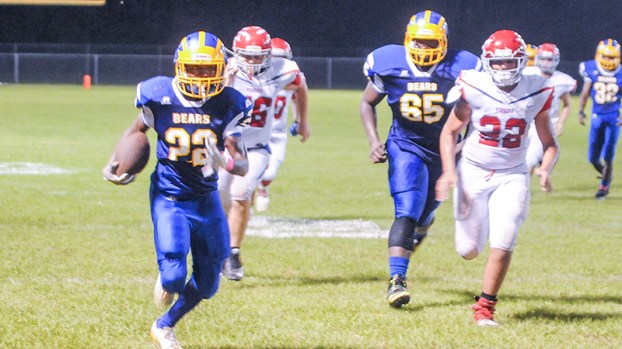 Keith running back Jeashan Black had one rushing touchdown in the Bears’ 50-6 blowout win over Verbena on Friday night.

The Keith High School Bears (4-3) had a big night on Senior Night in Orrville as they defeated the Verbena Red Devils 50-6 Friday night.

The Bears got off to a slow start, but were able to overwhelm the Red Devils with multiple big plays throughout the game.

“We did have some big plays, and we’re a big play team,” Keith head coach Harry Crum said. “But if it comes down to it and we have to nickel and dime you and go ball control, we have backs that are capable of doing that also.”

After a slow start to the first quarter and an early turnover, the Bears were able correct themselves before Verbena could take advantage.

Thomas fumbled on his second carry of the ball game, but recovered a Red Devils fumble on the next play. The offense used the momentum swing and Edwards hit Jackson on a 74-yard touchdown pass. The successful two-point conversion gave the Bears the 8-0 lead.

On their next possession, Murray broke out a 64-yard run that setup Thomas’ 25-yard touchdown run. Another successful two-point extended the lead to 16-0.

A quick Verbena three-and-out allowed Keith to go on another scoring drive. Edwards and Jackson connected again, this time for a 47-yard touchdown to make the score 22-0.

To wrap up the first half, Black ran a 46-yard touchdown with 35 seconds left on the clock.

In the first half alone, Keith had five plays of 25-yards or more, and the team already had more than 200 yards rushing.

Keith kept the pressure on the Red-Devils in the second half, and scored on a 79-yard run by Thomas on the first play of the third quarter. The score was 36-0 after the two-point conversion. Edwards threw his third touchdown of the game to Mark Young on a 48-yard play on the following drive. The next touchdown drive was setup by Jeremiah Adams’ fumble recovery right before the end of the third quarter. Three plays later and Murray ran a 75-yard touchdown for Keith’s final score of the game.

The Bears played lights out defense all night long. The recovered two fumbles and intercepted a pass. Had it not been for a late fumble by the Bear’s offense in garbage time, they were in a good position to complete the shutout.

“We’ve got some guys that are physical and quick,” Crum said. “Once the machine started rolling, they got their confidence and stayed in Verbena’s backfield most of the night.”

Red Devils full back Trevor Hilyer scored the only touchdown for his team and the extra-point attempt was blocked.

That’s two region wins in a row for Keith as they improve to 3-1 in the region standings. Next Friday, Oct. 20, the Bears will face the R.C. Hatch Bobcats (2-5) in Uniontown for another region game.

“We’ll continue to win, and hopefully we can host [a playoff game], because it’ll make a big difference in the playoffs,” Crum said.

The Southside Panthers’ (4-3) trip to Montgomery ended their two-game winning streak with a 42-22 loss to the Montgomery Academy Eagles (6-1).

The Dallas County Hornets (1-6) lost their third consecutive game to the Marbury Bulldogs (4-3) 28-14 on Friday night.