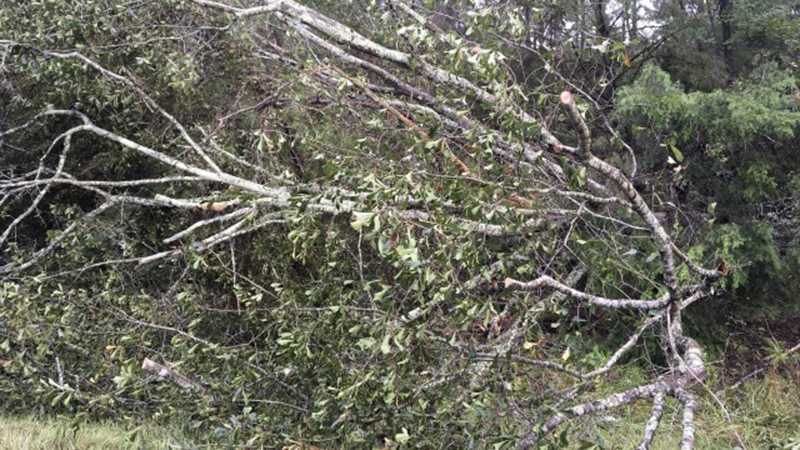 Four tornadoes Saturday evening in Lowndes, Chilton and Autagua counties snapped and uprooted many trees but produced no injuries. One home was hit by a fallen tree in Chilton County. (Photo from Birmingham National Weather Service)

Hurricane Nate brought four EF-0 or EF-1 tornadoes to the area, including one in Hayneville and two near Maplesville.

No injuries were reported in the storms, which touched down in mostly wooded areas in Lowndes, Chilton and Autauga counties, according to the National Weather Service in Birmingham.

The Lowndes County tornado began at 6:55 p.m. near a chicken farm along County Road 33 and moved northwest crossing Alabama 21.

The twister lifted just east of Mosses, staying on the ground for five minutes. Trees were snapped and uprooted along the damage path, which was 2.9 miles long and 400 yards wide at its widest point.

One of two tornadoes in Chilton County occurred in the Pletcher community, which is southwest of Maplesville.

The tornado was the weakest of the four with 60-mph winds and produced sporadic damage along its short path, which was mainly broken tree branches.

The other Chilton County tornado affected the Posey Crossroads community between Maplesville and Jemison.

The twister had 100-mph winds and touched down near a wooded area west of Chilton County 36 and Alabama 191. Numerous trees were damaged and uprooted, including one that fell on a residence. The storm’s damage path was 6 miles long and 150 yards wide at its widest point.

The fourth tornado of the day touched down south of Autaugaville just north of the Alabama River.

The twister was the strongest Saturday with winds of 105 mph. Trees were snapped and uprooted for 3.9 miles.

As Hurricane Nate was moving through Alabama on Sunday, Selma recorded a wind gust of 45 miles per hour.

The official highest gust from the storm was 46 miles per hour, which was recorded in the Pools Crossroad community southeast of Maplesville.

Selma recorded 3.26 inches of rain from Hurricane Nate, which was among the wettest areas in central Alabama.

In neighboring Chilton County, Clanton received 3.62 inches. Rain totals of up to 7 inches were reported closer to the Gulf in Baldwin County.