FIRST RESPONDER OF THE WEEK: Blanks motivated by brother 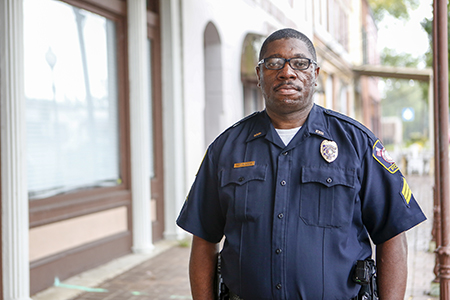 Sgt. Ray Blanks with the Selma Police Department knew he wanted to be a police officer at age 9.

Sgt. Ray Blanks with the Selma Police Department knew at a young age that he wanted to be a police officer. At just 9 years old, Blanks said he would try to follow police cars and fire trucks to see what was going on.

He was sworn in as an officer years later, but what happened in 2009 to his brother R.J. Phillip Blanks solidified his reasoning for being in law enforcement.

“That’s really my motivation to my job,” Blanks said of his brother. “I work every day in honor of my brother.”

R.J. was killed in a domestic violence homicide in Selma, and Blanks said since then, he has even more determination to make sure he helps to keep the citizens of Selma safe.

Blanks got his start in law enforcement as a jailer and dispatcher before working his way up.

Now, Blanks is a supervisor and said he works to better the officers below him and let them know that what they do is a career, not a job.

“I have gone to numerous training to better myself on how to be a better supervisor and how to teach people, especially young officers that are coming in fresh into the job,” Blanks said. “Law enforcement is a career, not just a job. We have a code and an honor that we have to serve the citizens of Selma every day.”

Blanks is married to Tremeatra and he has three children, Emanuel Jones, Emanuel Blanks and Tiffany Blanks.

But his three children are not the only kids he works with.

For years, Blanks said he served as a little league coach and for the past two years, has worked as the assistant football coach at Ellwood Christian Academy.

“A lot of my motivation is helping the youth,” Blanks said. “There’s a lot of children that don’t have father figures, and coaches really serve as that man that they need in their lives to make them become better people. Some listen and some don’t, but you save a whole lot more than you lose.”

Blanks said working with the children is also a great opportunity for them to see police officers in a different light.

“It’s all about bridging the gap,” he said. “Just being out there with them, they get to see a side of police that’s not bad. They actually see someone out there that wants them to do better.”