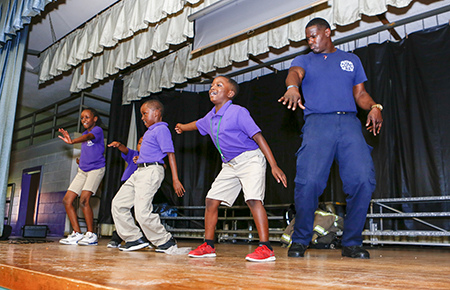 Clark Elementary School students dance during a program with the Selma Fire Department on Tuesday.

Fire Prevention Week only lasts seven days nationally, but for the Selma Fire Department, it spans the entire month of October.

Each October, the department goes to every school in the city to teach children about fire prevention and safety.

“It’s one of those things where we look forward to October probably more than the kids. We prepare for this all year.”

They danced, laughed, performed skits and taught the students about what to do in case of a fire.

“With keeping their attention with dancing, music and being funny, they retain it better because it’s something they like,” Waters said. “So if you give them something they like but also put in good information, they’re maintaining all of it.”

Waters said they don’t just try to teach the children about fire safety, but they also try to serve as positive role models, so when they see them out in the community they aren’t afraid to talk or interact with them.

“We try to bring more positive to the schools and let them know that the men are fun, the fire department is fun and policing is fun,” Waters said. “The kids are the future. If we don’t give them a good platform, there’s no telling what they’ll build, so I feel this is a piece of the platform we build for the kids.”

Whether it was learning how to stop, drop and roll or get out, stay out, the children made sure they repeated it back to the fire fighters to show them they were listening.

“When we ask questions, most of the times the older kids already know the answer, and that’s a positive thing we take away from it,” Waters said. “It means we’re doing a great job. It means we’re reaching out and touching the kids. We’re giving them information, and they’re retaining it.”

After learning some important lessons, Lt. Venter asked the students if they wanted to see a magic trick. He then asked them to turn around, say the magic words and count to 10. When they opened their eyes and turned back around, they erupted in cheers and laughter as Sparky appeared onstage.

The group will be making appearances at other schools throughout the city during the month of October.