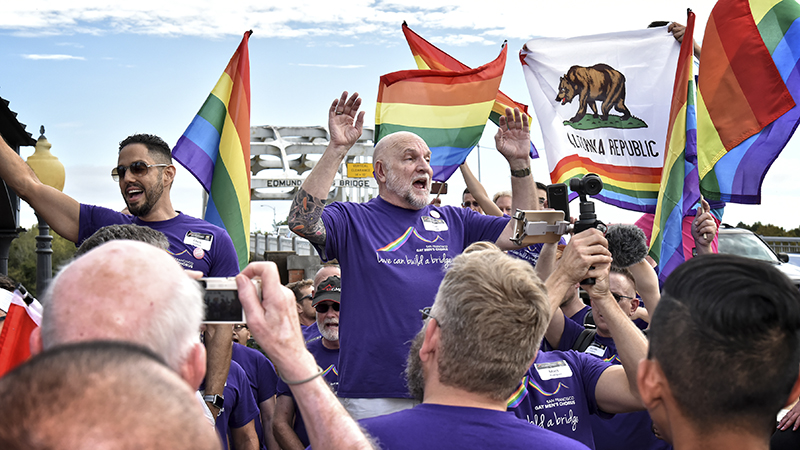 Dr. Timothy Seelig, artistic director of the San Francisco Gay Men’s Chorus, leads the group in song Monday at the foot of the Edmund Pettus Bridge. (Photo by Gareth Gooch)

The 300 members of the San Francisco Gay Men’s Chorus, which is on a tour throughout the south along with the Oakland Interfaith Gospel Choir, made a stop Monday in Selma to sing at historic Brown Chapel AME Church and walk across the Edmund Pettus Bridge.

Chris Verdugo, executive director of the chorus, said they decided to make a pit stop in Selma because of its Civil Rights Movement history.

“We made a decision a long time ago when we were in the early planning stages that we would stop in Selma for a few hours because it’s the ground zero for the civil rights movement,” he said.

“In many ways, the LGBT movement aligned with that movement in the essence of what it is that we have all been fighting for, which is to be acknowledged, to be respected, to be treated fairly and equally under the law.”

Verdugo said Brown Chapel AME hosted a private service for the chorus Monday and allowed them to sing.

“I think it was a profoundly moving experience,” he said. “I would even say what it should be in a church. It was a spiritual experience for us, and I think it really helped us to connect on a deeper level.”

Verdugo said it was also a learning experience.

“For many of us who are not from the South or who are young and not as familiar with the civil rights movement, it was a history lesson, and for those who are African American or who were old enough to been alive during that, it was really profound,” he said.

The group listened to words from pastor Leodis Strong and foot soldiers that were part of the movement. Verdugo said they sang spirituals and several songs, including “Love Can Build a Bridge,” which he said was the theme song of today’s trip.

Their visit at Brown Chapel was followed by a walk over the Edmund Pettus Bridge, which was another special moment for many of them.

“It was very powerful to walk across that bridge,” Verdugo said.

The Lavender Pen Tour goes through Mississippi, Alabama, Tennessee, South Carolina and North Carolina. Verdugo said the tour presents an opportunity to have a conversation in states where the LGBT community still faces adversity and to serve as support and an inspiration to others.