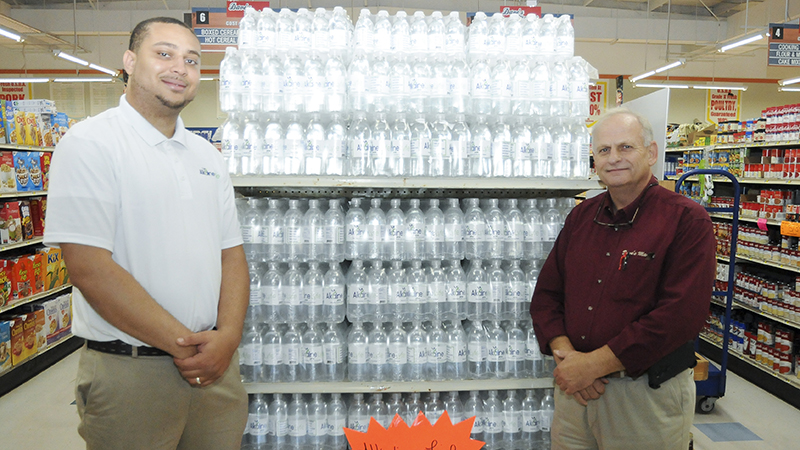 A Selma native and Alkaline Lyfe founder Malcom Crittenden and Dave’s Market owner David Oliver pose for a photo inside the market.

When Malcom Crittenden was a student at Selma High School, his teachers told him that they had a feeling he was going to do something in business one day. The foresight of his former teachers identified an entrepreneur in him, and now Crittenden is the owner of his own business, Alkaline Lyfe.

“Growing up in Selma instilled another level of hustle in me. Selma is a small town, but I had a lot of influential people that kept me on the business mindset,” Crittenden said. “I’m thankful that I grew up in Selma, because I feel like I know how to take advantage of everything.”

The difference between alkaline water and other bottled water products is its pH levels. The pH levels are the measurement of the acidity of the water on a scale of 1-14, one being the most acidic.

According to Crittenden, most bottled water measures at about a 6.0 and most tap water is neutral at 7.0. Alkaline Lyfe water tests at an 8.0 pH level.

“Your body is going to start working better, you’ll have more energy and you’re going to be more hydrated. It’s going to boost your immune system to help fight off diseases,” Crittenden said. “All those things just from raising the pH level of your body.”

Crittenden has been passionate about alkaline for years, but it was always difficult to find. Even while he was growing up in Selma, he knew of the health benefits that alkaline water could provide.

“I wanted to drink it, but I just didn’t have access to it,” he said. “That led me to look into some ways where I could provide alkaline water to everyday people. Not just people who have money, because some people look at this as an expensive product.”

“When I was working at Wells Fargo, it was enough for me and my wife,” Malcom said. “But it wasn’t enough to bring in a new person, so I knew I had to do something extra. That’s when I came up with the brand Alkaline Lyfe.”

Alkaline Lyfe gets its water from the Big Spring Water company, named after the natural spring they draw the water from, in Calhoun, Georgia.

Big Springs is a historical landmark that has been used as a watering hole by Native Americans, the Spanish explorer De Soto and both armies during the Civil War, according to the company’s website.

Three months into owning his own company, Malcom is just a one-man operation.

So far, he’s gotten several stores to place his product on the shelves.

Alkaline Lyfe made its Alabama debut this past Thursday at Dave’s Market in Valley Grande. David Oliver, who owns Dave’s Market, was intrigued by the demand from his customers for Alkaline Lyfe.

“People were seriously asking for it,” Oliver said. “That’s what surprised me.”

He placed an order for the alkaline water the day after Malcom brought him samples. A case of 24 bottles of Alkaline Lyfe is $10.42 per case at Dave’s Market.

“I feel honored to be able to bring this to a city that raised me to be the man that I am today,” Malcom said. “I spent over 25 years of my life in this city, so for me to bring a product that’s going to help people means the world to me. For them to be one of the first ones to put it up, I’m on cloud nine right now to be honest with you.”

Alkaline Lyfe will also be available in Montgomery, Tuscaloosa and Atlanta, Georgia.

According to Crittenden, the most challenging part of getting started has been convincing stores that Alkaline Lyfe isn’t just another case of bottled water.

Alkaline Lyfe is what it is today thanks to the support and encouragement from Selma, according to Malcom. Before he was making deals with stores, or on any shelves, the people of Selma would show their support and buy cases from him directly when Malcom came back to town.

“They’ve been supporting me before I was even in Dave’s Market,” he said. “I would come down here with 15-20 cases, and they would buy them as soon as I got down here. I just want to thank everyone for the support, especially my family.”