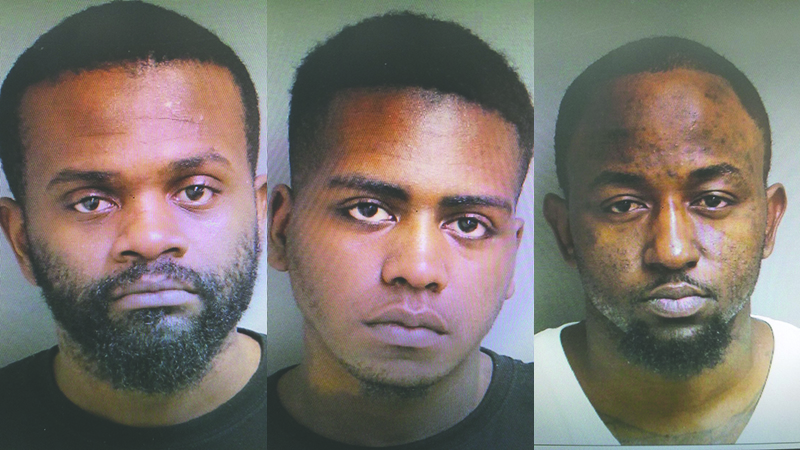 Demario Benjamin, Markus Gloss and Christopher Ford have been charged with 14 counts of identity theft.

Dallas County District Attorney Michael Jackson said 32-year-old Demario Benjamin, a former constable, 35-year-old Christopher Ford and 22-year-old Markus Gloss were arrested and charged with 14 counts each of identity theft after a search warrant was executed on a room at a Selma hotel on Highland Avenue.

“They have caused a lot of problems around here,” Jackson said. “This is one of the largest financial crime situations in Selma’s history.”

Jackson said the criminal operation was under investigation for nearly nine months and is responsible for frauding citizens, businesses and even the city of Selma out of a couple hundred thousand dollars.

“They hit a lot of places –– businesses, the city of Selma, citizens and that’s just the beginning of it,” Jackson said. “We expect more charges and a lot more money that was taken that people got defrauded out of.”

Earnest Donaldson, an agent with the Fourth Judicial Circuit Drug Task Force, said the search warrant was executed around 6 p.m. Thursday night. Benjamin, Ford and Gloss were inside the room at the time.

Equipment and other evidence found inside the hotel room lead authorities to believe this was no simple operation.

“It was very extensive and sophisticated,” Jackson said. “They had all kinds of computers, credit card machines, counterfeit money machines, they had ledgers, they had people’s social security numbers and names.”

All of that and more was found inside the hotel room, which was a makeshift headquarters. Jackson said the operation was responsible for producing counterfeit credit cards, checks and even money, along with stealing identities.

Donaldson said they also recovered blank Visa and Mastercard credit cards and blank check stock paper, as well as two handguns and drugs. There were also several printers and laptops.

Gloss, a former city of Selma employee in the recreation department, was just arrested in June for reproducing and cashing counterfeit checks from the city of Selma.

My’Keisha Brown, 26, was also arrested in that case. Ford was arrested in March for forgery.

All three men are being held on $150,000 bond. Jackson said Ford and Gloss had their bond conditionally revoked due to their earlier arrests.

Jackson said he expects there to be many other victims and asked anyone that suspects they were victim to call the district attorney’s office at (334) 874-2540.