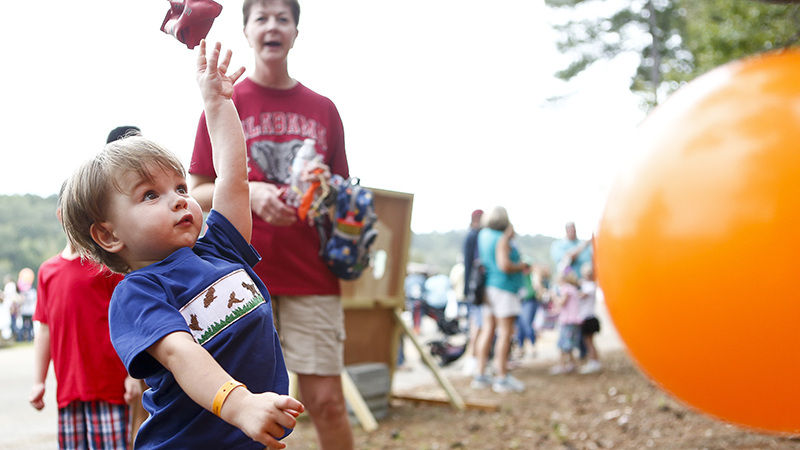 Although Hurricane Nate is expected to make an impact in Selma in less than 24 hours, the weather held off Saturday with just a cool breeze and overcast sky.

“The turnout was exceptional with the weather forecasted the way it was and the fair being in town. We thought our attendance was going to be low, but it has been really good,” said Anita Ellison, a volunteer with the park. “People turned out. They’ve had a good time.

Dozens of vendors were set up with arts and crafts, food, pet adoptions and more, and there were plenty of games for children to enjoy.

“We came out here last year, and we had a good time, so we had to come back out this year,” said Whitney Ballard, who was out with some of her family members and her son, Briar Denson. “We’re really excited that there’s something like this around Selma now because there hasn’t been in years past.”

The festival was an idea the Friends of Paul M. Grist State Park came up with last year to attract people to the park after the county took it over from the state. The state closed the park, along with several others, in 2015 due to budget cuts.

“We were one of those people that were really upset when they talked about the park closing because we actually came out here and rode horses a lot, so anything that the park does, we would love to support because it’s such a good thing for our community,” Ballard said.

Ballard said her 5-year-old had a great time playing the games and riding horses at the event, and she is glad that the group puts on the festival for the community.

“It’s such a good thing,” she said. “We’re always looking for things to do on Saturday mornings when the kids are out of school to get out of the house and this is something fun for them to do.”

“I think they did a good job of adverting it beforehand because there’s a lot of people out here I noticed,” Ballard said.