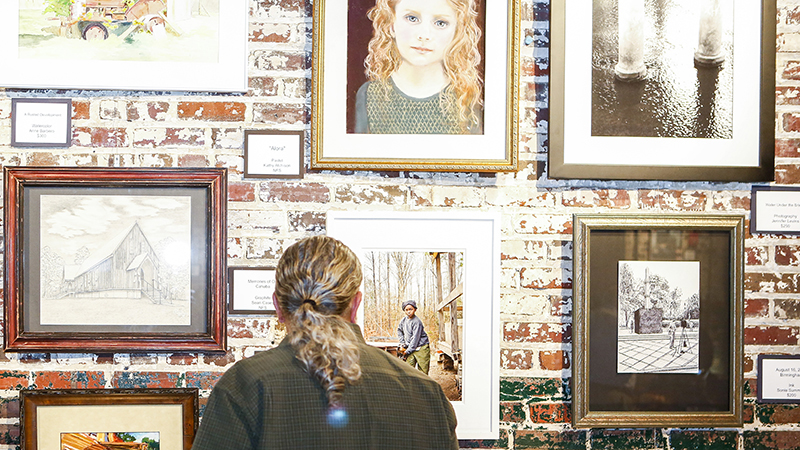 David Hurlbut views pieces in the “Celebrating the Art of Paper” exhibit in the Carneal building.

A couple of hundred people came out Thursday night for the opening reception of ArtsRevive’s and International Paper Riverdale Mill’s “Celebrating the Art of Paper” exhibit.

Approximately 30 artists submitted nearly 80 pieces of work for the juried show, and University of Montevallo photography professor Karen Graffeo walked away with the top prize for the second straight year.

Graffeo said she was excited to win best in the show, although she wasn’t expecting that when she walked in.

“This is such a treat. I was blown away,” she said. “I just walked in and saw that and thought oh my goodness.”

The winning piece, Child Prodigy, is part of a 15-year documentary that she has been working on with the Roma/Gypsy/refugee population in Italy and Eastern Europe. Graffeo took the show-winning photo in Rome.

“One thing that happens with any population where there is hardships and poverty is that children have a very, very short childhood. They become responsible for helping support the family, and that’s what this little child was doing with his accordion,” Graffeo said. “His eyes, his soulfulness, and I knew the responsibility of his life.” 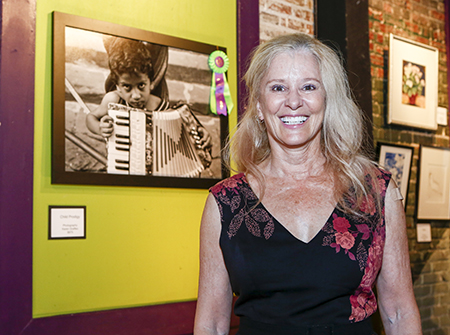 For the second year in a row, University of Montevallo art professor Karen Graffeo has won best in show.

Graffeo said she enjoys having her work on display for people to talk about and view.

“The nice thing about art is it doesn’t explain the truth; it ignites the truth,” she said.  “The viewer brings their own spark of how they see and what they add to it.”

Arthur McLean, the mill’s communications manager, said the show started off as a way to bring the community together for the mill’s 50th-anniversary celebration last year, but International Paper wanted to continue the exhibit.

“It started as an idea out of our 50th anniversary that we had last year. It came out of a brainstorming session, things related to paper,” McLean said. “We wanted to reach out to the community and partner with a community organization to expand that celebration out into the community.”

McLean said he enjoyed looking at the different pieces in the show.

“I think it’s great,” he said of the work. “I think there’s some strong work here, and we appreciate the fact that we have space here and the ability to invite artists from around the state to come in.”

“It’s been a fun show,” Lockett said. “We get new artists here who are willing to come into a newer show. It’s a good mix, and it brings new people into the building, folks that have never been here before.”

“We are pleased with the turnout. We wanted there to be a good turnout tonight for International Paper because they have set their flag and said they believe in Selma, and that’s no small investment,” Lockett said, referring International Paper’s decision to invest $300 million in converting one of its paper machines to produce linerboard and containerboard.

“We wanted this to be a good turnout, so they know how much people appreciate them.”

The exhibit will be open on Fridays and Saturdays all of October from 11 a.m. to 4 p.m.