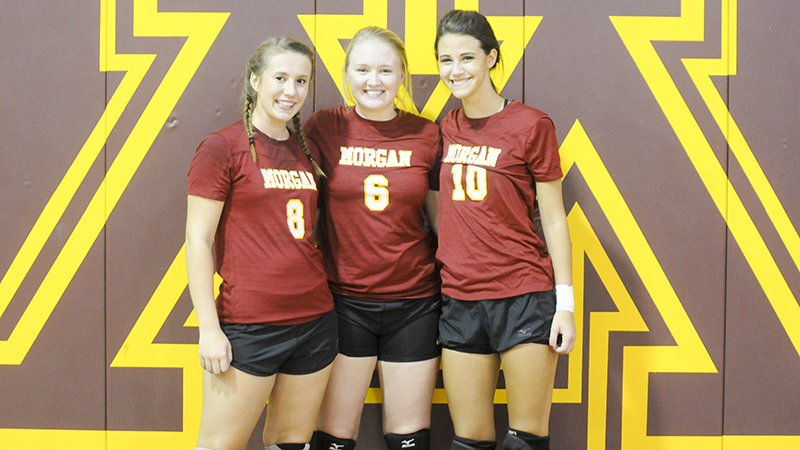 The region win over the Eagles gave the Senators a 5-1 record in the area standings. Morgan and Clarke Prep shared the same region record, but Clarke Prep won the tie breaker since they played fewer sets and had a higher winning percentage according to Morgan head coach Kayla Thacker.

Nonetheless, the win set the Senators up to be the No. 2 seed in the upcoming area tournament. The seniors led the way on the court and in the stat sheet. Hewitt had eight kills. Free was second on the team with three aces, and Horton led the team with seven assists during the match.

“All three of them have stepped up into a leadership position, and all the girls look up to them,” Thacker said. “They work well as a team, and I can count on them for pretty much anything.”

Free and Hewitt combined for 11 points to lead the Senators in scoring in the first set. Free had four aces in the set and got the game winning point to close the first set at 25-15.

Morgan kept up their hot pace and started the second set on an 8-0 run. Tindall Albritton was the star of the set as she accounted for nine points. Five of Albritton’s nine aces on Thursday came in the second set.

“Tindall’s serves are very consistent and very good,” Thacker said. “She’s the best server we have on the team, and she’s really come a long way since last year.”

The Eagles tried to mount a comeback, but they were too far behind and Morgan won 25-18. The third and final set was much like the second in that Morgan separated themselves early before finally winning 25-16. Fort Dale went on a six-point run on Morgan’s match point before Abigail Lane scored the final point of the night.

“I think they played very well together as a team,” Thacker said. “Everyone got to play. They did really well executing their plays, but there are some things we still need to work on before we play next week.”