All eyes on Tropical Storm Nate 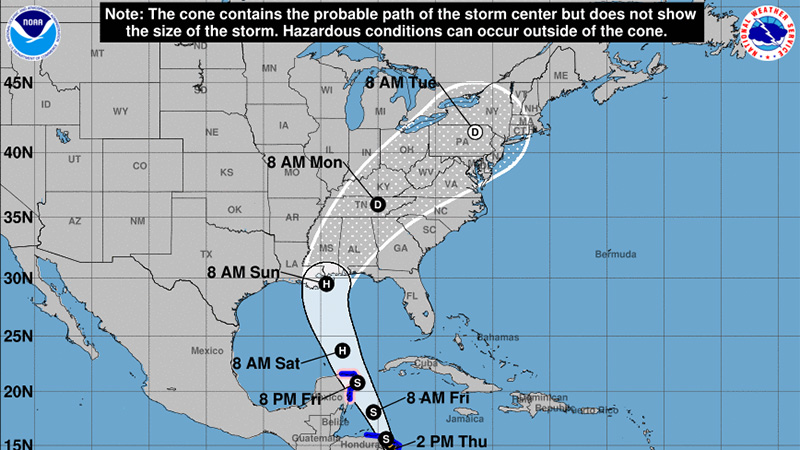 The current National Weather Service track for Tropical Storm Nate would bring the storm into Alabama as a hurricane Sunday morning.

All eyes will be on the tropics this weekend as Tropical Storm Nate is forecast to become a hurricane and move toward the Gulf Coast.

The Birmingham National Weather Service is predicting Selma could expect wind gusts of up to 55 miles per hour, up to 2 inches of rain and the threat of an isolated tornado.

The worst weather for Selma is currently expected Sunday afternoon into the evening hours, according to NWS meteorologist Gerald Satterwhite.

Tropical Storm Nate is skirting the Yucatan Peninsula in Mexico through Friday before moving north at a quick pace.

The official forecast from the National Hurricane Center has the storm becoming a Category 1 hurricane before making landfall near the Louisiana/Mississippi line around 8 a.m. Sunday morning.

“We are still narrowing down the track and intensity of the storm. Right now, it doesn’t look like it will get too strong,” Satterwhite said.

Satterwhite said the weather service would better be able to narrow the tornado threat more by Friday morning.

“With the current forecast track, we will be on the Eastern side, which is more favorable for tornado activity,” Satterwhite said.

Flooding isn’t expected with the storm. Most of the state has been dry recently, and Satterwhite said the weather center’s hydrologist said it would take six inches of rain to produce a flooding threat.

“Right now, we are not forecasting that much [rain],” Satterfield said. “We’ll be trying to fine-tune those aspects of the storm overnight and into tomorrow.”

Nate will be the fourth tropical storm or hurricane to affect the Gulf Coast this hurricane season.