Morgan needs to flip the script in rematch against Fort Dale 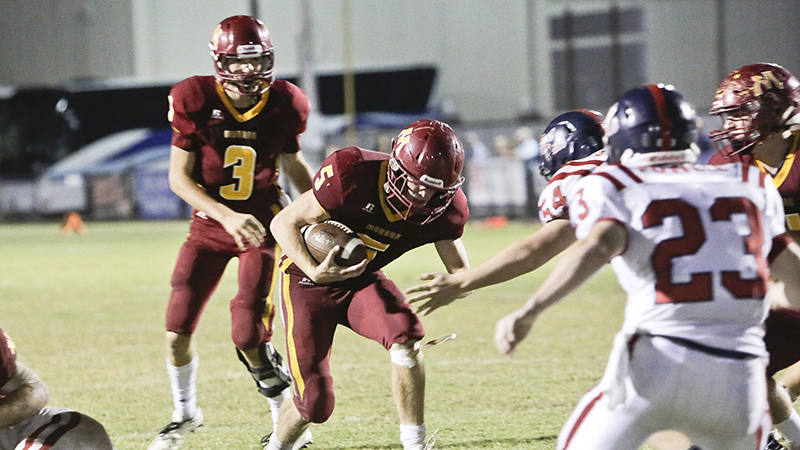 The Morgan Academy Senators (3-3) go on the road to play the Fort Dale Academy Eagles in Greenville (5-1) on Friday night.

This regional matchup is the game of the week because it is setup to define Morgan’s season just like it did in 2016.

Last year the Senators were on a three-game win streak with a 1-1 region record going into the Fort Dale game on the first weekend of October. The 29-28 loss to the Eagles began a four-game slide that ruined Morgan’s 2016 season.

Again, it’s the first weekend of October and the Trojans have a 1-1 record in the region standings with four games left to play.

This year, it’s Fort Dale that’s on a three-game winning streak coming into the game, but the Senators would like nothing more than to avenge their 2016 loss.

The Senators are averaging 31.5 points per game and allowing just 23.5 to opponents. The Eagles have a similar offensive output, but their defense is only allowing 16.8 points per game.

The two teams are tied in the region standings, but Fort Dale’s overall record places them ahead of Morgan.

Hooper Academy and Pike Liberal Arts also have 1-1 region records, so this game will determine if Morgan goes into the next week in the top or bottom half of the AISA 3A Region 2 standings.

After the Fort Dale game, the Senators will only have two region games left on the schedule. Making the playoffs is still a possibility for the Senators if they are able to get through these critical region games.

The Southside High School Panthers (3-2) go on the road to face their next region opponent, the B.B. Comer Tigers (0-5), in Sylacauga on Friday night.

Southside is currently in third place in the Class 3A Region 3 standings behind Montgomery Academy and Pike County. The Tigers are winless and in fifth place, but Southside can’t afford a slip-up with only three region games remaining on the schedule.

The Panthers have both the historical and statistical advantage over the Tigers. The two teams faced each other for the first time in 2016, and the Panthers won 40-20.

According to Panthers head coach Daniel Flowers, winning this game will be a big step towards his goal of making the playoffs.

The Selma High Saints (3-2) get back into region play with an away game against Northridge (2-4) in Tuscaloosa on Friday night.

The Saints have been unable to put together back-to-back wins this season. The game against Northridge is important because the Saints are already 0-2 in region games this season, and they have four consecutive region matchups coming up.

Even though Selma High has the better overall record, they are directly beneath Northridge at sixth place in the standings.

How Selma High performs in this upcoming four game stretch against regional opponents will determine if they can make the playoffs.

The Dallas County Hornets (1-4) also return to region play this Friday against the Demopolis Tigers (4-1).

Despite their losing record, the Hornets’ season isn’t over just yet. Currently they are 1-1 in region play so far, and that has been good enough for the team to be in fourth place in the standings.

On the other hand, Demopolis sits at the top of the standings having gone undefeated in three region games. The Tigers also have a defense that’s only allowing 11.6 points per game.

The Hornets have only been able to average 10.2 points per game this season because they were shutout twice.

After the game against the Tigers, the Hornets will have three more region games in a row.

The playoffs aren’t out of reach yet, but these next four games will shape Dallas County’s season.

The Bears defeated the Rams 38-8 last season and are in need of a win after last week’s overtime loss to Southside High School.

The game against Francis Marion, however, is more important since it’s the first of four straight region games in the final half of the season.

The Bears region record currently stands at 1-1, which puts them in third place. They are two spots ahead of Francis Marion who is 1-2 in region play.

The difference between the two is on offense where Keith scores at a much higher rate. The Bears average 30.2 points per game, and the Rams only average 12.8.

Keith has improved their ball security over the last few weeks, according to head coach Harry Crum. Should that continue, the Bears are in a good position to get their second region victory of the season.

The Ellwood Christian Eagles (0-5) will host the Notasulga Blue Devils (3-2) this Friday night for a region matchup.

The Eagles have three region games left and are at the bottom of the Class 1A Region3 standings.

The Eagles have been shut out twice this season and have only scored 28 points in five games. The Blue Devils average 28 points per game.

The Eagles are in for another tough game against a team that scores very often.

The Meadowview Christian Trojans (1-5) are coming off their first win of the season. They will face the Russell Christian Warriors (6-0) this Friday night in Meridan.

The 8-man football team only has three games remaining on the schedule.

The Warriors, who are ranked No.1 in the standings, will be the Trojans’ toughest competition yet.

The Warriors have scored 223 points this season compared to Meadowview’s 156. The Russell Christian defense has only given up 61 points this year as well.

It will be a difficult game for the Trojans who are currently in seventh place.