YMCA puts mentors, students together for Reach and Rise program 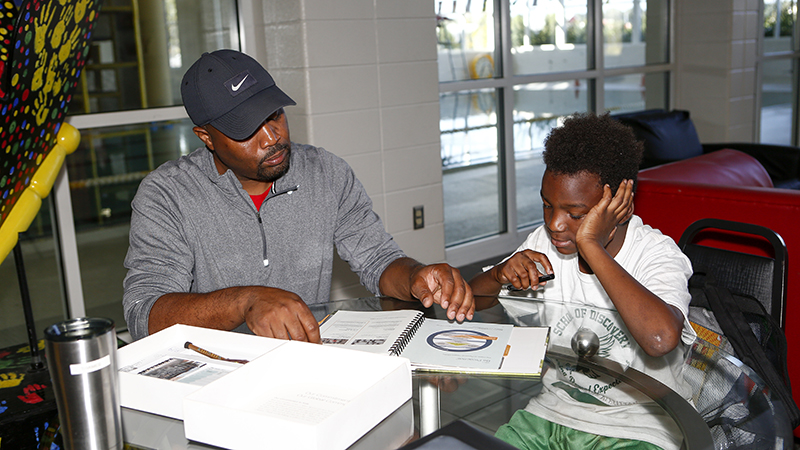 Samareon Albritton reviews homework with his mentor Jerome Thames at the YMCA of Selma and Dallas County.

One of the many services that the YMCA of Selma-Dallas County is able to provide thanks to donations to the annual campaign fund is the Reach and Rise mentorship program.

“The Reach and Rise mentoring program is a therapeutic mentoring program, and we match youth with adults who can be positive role models in their life,” program director Martha Pilcher said.

Through the Reach and Rise program, mentees are able to initiate a positive relationship with an adult that can help them grow socially and academically.

Shamareon Albritton met his mentor Jerome Thames a few months ago and their relationship has had an impact on both of them.

In fact, Albritton was the one who was seeking out a mentor.

“I interviewed Shamareon long before I had a mentor for him and when I interviewed him he said, ‘I want a mentor,’” Pilcher said. “He understood what it was. He wanted one, and every time I saw him he would ask ‘When are you going to get me my mentor?’”

Pilcher’s first choice for Albritton didn’t work out, but Thames has worked out wonderfully for him. Thames is a welding teacher at Wallace Community College Selma, and he also has two daughters of his own. He has found something special in having an impact on a young boy’s life.

“From day one it’s been great,” Thames said. [Albritton] is very open and talks to me. He’s not shy at all.”

The two meet at least once a week. Twice if possible. Thames will pick Albritton up and bring him to the YMCA where they do anything from shooting pool, playing basketball or swimming. Thames also makes it a point to help Albritton with his homework and teaches him about different life and social skills to help him think and act more positively.

“He’s being more conscious of when he does things,” Thames said. “I see now that he’s starting to value his education more than when we first met.”

Thames has placed an emphasis on getting Albritton to think positively and think about his actions.

“I learned that positive choices are always good choices,” Albritton said. “Positivity can lead you to good things.”

Albritton has taken what he’s learned outside of the YMCA and has been applying it in his day-to-day life. He said that he’s learned to just walk away when someone is bothering him, and it makes him feel good to use what his mentor has taught him.

“Jerome has really been able to embrace his personality and his wisdom, and also expose him to other things in our community that Shamareon would never have experienced outside of this mentoring program,” Pilcher said.

Mentors must be able to be available for mentees in both the good and bad times, according to Pilcher.

The program, which already has 14 mentor-mentee matches is having a profound effect on everyone involved.

“Even at 11 years old, Shamareon sees that he’s learning new skills to help him in life that are taking him out of his box where he lives, and helping expose him to different ways of dealing with life,” Pilcher said.

The annual campaign fund helps services like these remain available in the Selma Dallas County area. In order to contribute to the YMCA Annual campaign, interested donors can give online at ymcaofselma.org. Donors can also take their contributions directly to the YMCA, mail it to 1 YMCA Dr., Selma, contact the front desk at (334) 874-9622 or contact Murray directly at (334) 874-5203.