FIRST RESPONDER OF WEEK: Edwards has worked for ALEA, Selma and Dallas County 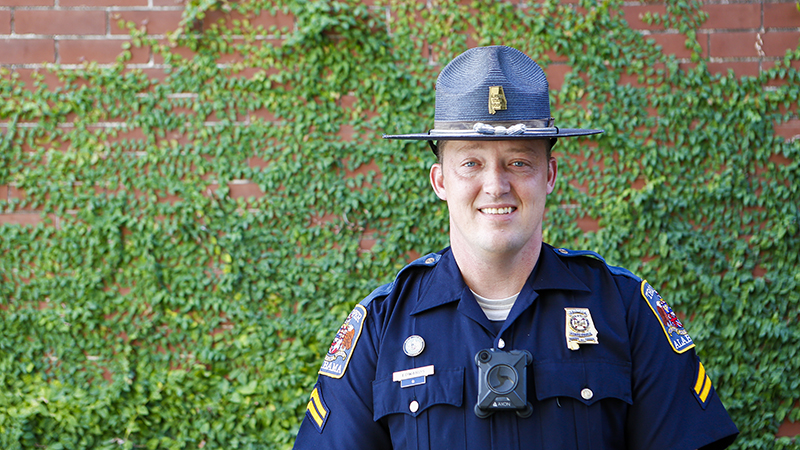 Growing up with his cousins, Calvin Edwards would play cops and robbers like many young kids.

But instead of taking turns being bad guys, Edwards always wanted to be on the “good” side.

“Growing up, I’ve always looked at law enforcement as something that I just wanted to do,” Edwards said. “My cousins and I would play cops and robbers, and I was always the cop.”

Now, when he puts on the uniform it’s for real. Cpl. Edwards is a trooper with the Alabama Law Enforcement Agency where he has served his state for six years. Prior to that, he worked for the Selma Police Department for three years and the Dallas County Sheriff’s Department for seven years.

“Law enforcement is a prestigious job in my book. It always has been, and it still is today,” he said. “It’s just something that I wanted to do.”

Edwards graduated from Dallas County High School and later Wallace Community College. He is married to Kate and they have four children, Mary Kathryn, Matthew, Hudson, and Nora.

Edwards works and patrols five counties, Dallas, Perry, Wilcox, Marengo, and Hale and said he enjoys having that range as a trooper.

Edwards said one of his favorite things about his job is meeting the people in the places that he goes each day, and potentially saving someone from a tragic situation.

“I like meeting new people and interacting with the public and going home and no one has died,” Edwards said. “You can’t control who lives and dies, but I think maybe I did turn down the right road and maybe I stopped a speeder and then they went home safely to their loved ones.”

Edwards said his hope every day is that he doesn’t have to write a death certificate –– his least favorite part of his job.

“In law enforcement, you hardly see the fruits of your labor,” Edwards said. “You see people at their worst and most stressful time. But if you go home after working your eight-hour shift and no one has died during your eight hours, you get a sense of accomplishment.”

Edwards said it’s a stressful job, but also a rewarding one.

“First responders respond to things without hesitation. There’s no second-guessing in anything. Most people run from the gunfire, we run to it,” he said. “It’s just in our nature. The radio goes off and here I come.”