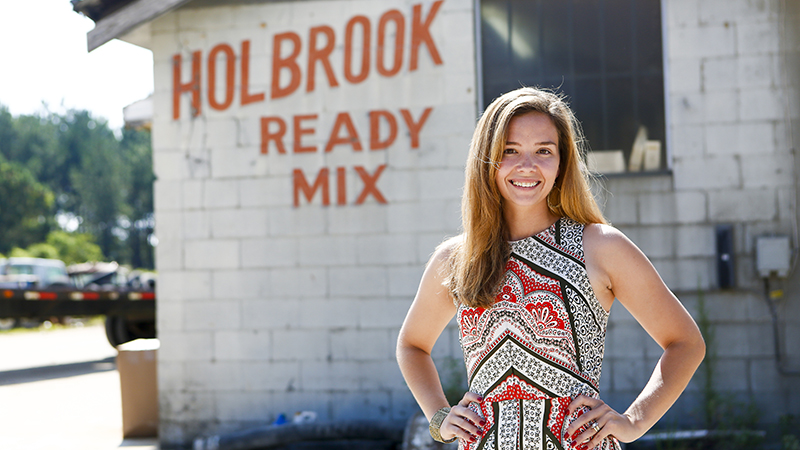 Co-owner Stephanie Holbrook represents her family in front of their concrete plant.

In 1987, Claude Holbrook and his son Kay Holbrook sat outside their home off of County Road 77 in Selma and took orders for concrete while sitting on five-gallon buckets when they opened Holbrook Ready-Mix.

Kay moved on to finishing concrete instead of running the actual mixing plant, which sits across from the family’s front yard, until Claude decided that he was nearing retirement. Everything was in line for Kay to purchase the family business from his father, until he passed away in a car accident on his way to a job on July 30, 2011.

Kay’s mixer truck hit a pothole on Highway 80 a few miles east of Southside High School, and the recapped front tire blew out. He lost control of the vehicle and was killed when the 1999 Mack truck hit a bridge and turned over.

Kay’s untimely passing left Holbrook Ready-Mix in a tough position. Many people doubted that the company would survive with Claude nearing retirement and the recent death of the presumed heir.

“The night after [Kay] got killed, there was a lot of talk in town that we were going to go out of business,” Donald Holbrook said.

In order to keep the business running, and more importantly within the family, Claude sold the family business to his 22-year old grandson Donald Holbrook in 2011. Prior to taking over the business, Donald was working at the car lot that his parents were running. The switch to the concrete business was difficult, but Claude remained close to show his grandson how to operate the business.

“It was very difficult for about a year,” Donald said. “I had to grow up. I didn’t have my dad there to turn to for help with my decisions.”

Not only did he have to learn the technical day-to-day operations, but he also had to work on dealing with the clients, managing employees and a wide variety of other organizational skills in order to properly run the company.

“We worked through that, and we’ve been growing ever since,” he said.

Donald took on his new responsibilities and has even helped the business expand beyond concrete. Holbrook Ready-Mix manufactures and delivers septic tanks. They can provide gravel, sand or crusher run for landscaping or driveways. The company also has dump trucks at its disposal that he’s incorporated into the business.

The business has been good to its employees through the years as well.

Willie Parker started as a driver for the company 25 years ago, and now he is the head mechanic for Holbrook Ready-Mix. 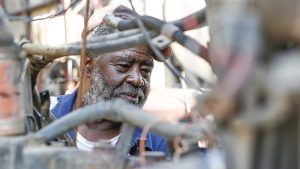 Head mechanic Willie Parker works on a truck in need of service. Parker has been working for Holbrook Ready-Mix for the past 25 years.

According to Parker, he became the mechanic when neither he nor Claude could find anyone else to do the job.

Even though he’s not in the family, Parker does acknowledge there is a unique difference in working for a family-operated business.

“When you’re working with the people that you know, that’s right there with you all the time, it’s kind of great,” he said. “You don’t have people coming in from out of town or up north. You’re here, and they’re somewhere else. [The Holbrooks] are here. If you have trouble with something you can sit down and talk about it.”

The loyalty of Holbrook Ready-Mix’s customers has been a key part of the business success over the years, according to Donald’s wife and co-owner Stephanie Holbrook.

We’ve got some guys that they just won’t use anybody else,” she said.

Holbrook Ready-Mix has survived the years due to the Holbrook family’s ability to pick each other up.

The women in the family have been just as crucial to the business’ success as the men have.

Claude’s wife Martha was the initial first lady of the business back when they first opened. She assisted with keeping the books and invoices for the company. After the passing of her son, she continued to help out as the ownership transitioned to her grandson.

In 2014, Stephanie stepped in to help run the business as well. She handles the phone calls, truck dispatching, invoices and many other administrative responsibilities. The family and the business are inseparable at this point. Donald, 27, and Stephanie, 25, raise their family on the same land they operate Holbrook Ready-Mix.

Outside their front steps, a small bike is laid down on the grass. The company office sits to the right of the house. Across the front lawn and on the other side of the gravel driveway that leads into their land, is the concrete plant. The large silo filled with cement stands atop the machinery that transfers the aggregate, admixtures and water.

In addition to running a 10-man operation for the business, the Holbrook family has to manage a busy household as well. Donald and Stephanie have three daughters and a son.

The oldest Ann Maria is eight-years old and her siblings Nona, Hollis and Margot are four, two and 10-months old respectively. The family also has three dogs that roam the property named Sheriff, Weenie and Niliao.

They enjoy being able to keep the family close while they run such a demanding business. Stephanie wakes up at 4 a.m. to go to the gym before returning home to cook breakfast for her family. At 6 a.m., she gets the plant up and running for the day. The drivers arrive to work an hour later before truck inspections. As soon as an order comes in or if there is a job on the schedule, Stephanie starts to send out the trucks for the day’s work.

Above all else, the Holbrook family is a Christian household that prides themselves on running their business with the same principles. The business is closed on Sundays and they try to wrap up early on Wednesday afternoon so they can make it to church.

“I can assure you that you will not be cheated and you will get what you pay for in the quality and quantity that you ask for,” Stephanie said. “We’re Christian and that comes first.”