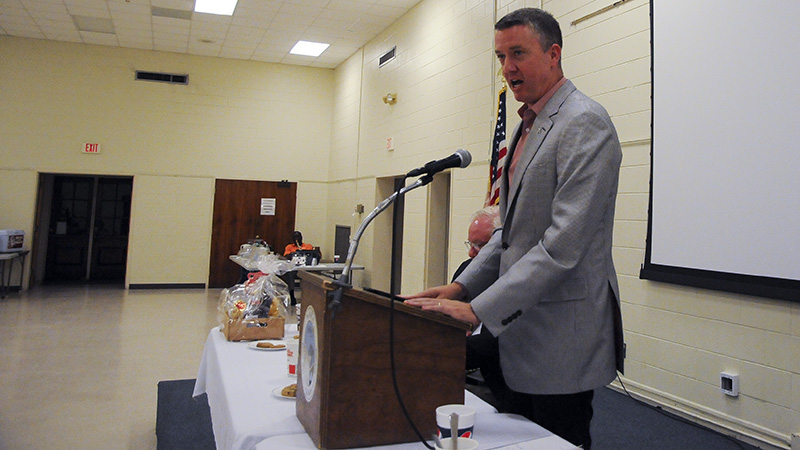 “What a great group,” Byrne said. “Obviously, I know there are a lot of Alabama fans down here in Selma, but a lot of college football and college athletics fans too. It’s great to be here and meet everybody.”

Byrne, who was visiting Selma for the first time, was hired this past March to lead the Crimson Tide athletics department after his predecessor Bill Battle stepped down. The University of Alabama has 550 student athletes competing in 21 different sports, according to Byrne.

In his first eight months on the job, Byrne has already hired a new baseball coach for the university and watched his football team get off to a 5-0 start.

In his speech to the QB club, Byrne emphasized the importance of sustaining the level of success that Alabama athletics has been building over the last several years. He praised the efforts of basketball head coach Avery Johnson that have improved the basketball program, and he said he’s never met a coach more focused than Nick Saban.

In order to maintain the high level of production and success at Alabama, Byrne said that it’s important for his department to honor the past, enhance the fan experience and develop the long-term strength of the athletics program.

According to Byrne, the university can’t take sell-out crowds for granted as they compete with the television experience. They are focused on enhancing the fan experience at Bryant-Denny Stadium to make sure fans continue to pack the seats for years to come.

He also stated that it will be critical for his department to be as strong as it can so that the successes can continue beyond the Saban era.

After Byrne concluded his speech, he addressed several questions on player protests and the current state of college basketball.

Byrne told the QB club that sports, especially college athletics, has always been “one of the great unifiers.” This past Thursday, Saban stated that he believed in people’s right to express their beliefs on his weekly radio show. The focus at Alabama has been on unity, according to Byrne.

“People do have a right,” he said. “What we are going to be more focused on is getting a chance for our student athletes to get together to talk about our differences, to talk about ways we can support them and different things we can do in the community to hopefully unify and strengthen that going forward.”

On the other hand, college basketball programs are under the radar after the recent FBI corruption investigation. Although no one affiliated with Alabama had been arrested or charged, former associate athletic director Kobie Baker resigned from his position after the school conducted its own internal review.

Byrne was on the National Mall in Washington D.C. when the calls started coming in about the FBI investigation. He said that they called compliance as soon as they could to see if Alabama had an issue and they found one.

“That was a challenging week last week,” he said. “When we saw what was going on nationally, we wanted to make sure we looked into it, and we took the steps we thought we needed to take once we looked at the situation.”

The athletic department is continuing to watch the situation closely and the compliance effort is ongoing, according to Byrne. In his conversations with Johnson, they are both on the same page as far as making sure they are following the rules the right way.

“You need to make sure you’re on top of the rules. Period. For all your teams, especially basketball, and that’s what we’re going to be focused on day-in and day-out,” he said.

The Selma QB Club will not meet next week. The next meeting will be Monday, Oct. 16, and former Auburn Tigers and Buffalo Bills running back Joe Cribbs will be the guest speaker.