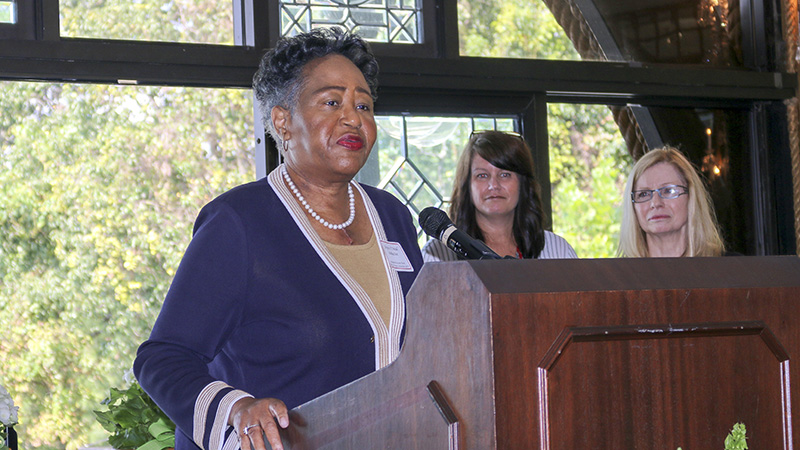 Joyce O’Neal gives her acceptance speech last Friday after being inducted into the Alabama Social Work Hall of Fame. (Arienne Nettles | The University of Alabama)

O’Neal, who retired in 2009, spent 35 years with the Alabama Department of Human Resources.

What made the experience even more special is her sister, Phyllis Alston, was inducted in 2014.

“It was extra special for me because my sister was inducted about three years ago, so that makes us the only siblings in the hall of fame. She too is a Selma native,” O’Neal said. “It’s very gratifying to know that you have a sibling that shares that honor with you.”

Alston spent 32 years with the Department of Veteran Affairs and worked in the University of Alabama’s School of Social Work.

O’Neal said one of the things she is most proud of during her career is climbing the ranks.

“I guess I could say I climbed the career ladder,” O’Neal said.

She got her start in Dallas County as a public assistance supervisor from 1977 to 1982 and a food stamp program supervisor from 1982 until 1993. She then became the director of the Department of Human Resources in Perry County in 1993, where she served in that role until 2003.

She was then named the director of the Food Assistance Division of the Alabama Department of Human Resources, where she oversaw the state’s food assistance program, Supplemental Nutrition Assistance Program (SNAP).

“That was, I guess you could say, the most gratifying,” O’Neal said.

“I was able to do some things and make some changes to the program to especially enhance the experience for our elderly. They were coming into county offices applying for benefits. Sometimes they would come in from rural areas and had to pay $25 to get to county office only to receive $10 to $14 in benefits.”

O’Neal said she started a program in Alabama that allowed elderly people to apply for assistance without coming into the office, which she said won an award in 2015 from the United States Department of Agriculture.

She’s also proud of helping the state’s food assistance program receive over $4 million from the USDA.

The hall of fame was founded by the University of Alabama School of Social Work.