Meadowview gets first win of season against Tuscaloosa Christian 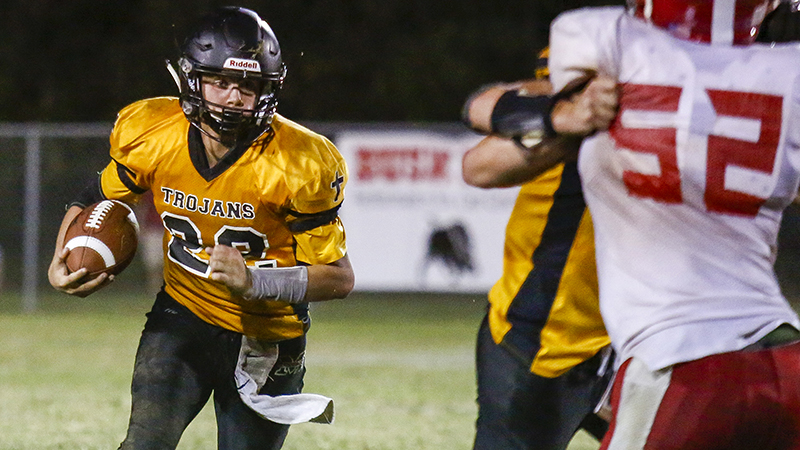 Meadowview quarterback Jeremy Lee runs the ball during the Trojans’ 68-46 win over Tuscaloosa Christian Friday night. Lee ran for seven touchdowns and threw for another.

Meadowview (1-5) quarterback Jeremy Lee was the star of the night with seven rushing touchdowns and one throwing touchdown.

But it was Chris Wilson who got things started for the Trojans with a 3-yard touchdown run in the opening quarter. With 9:47 left in the first, Meadowview went up 8-0 on Tuscaloosa (0-7).

“They’ve got a different pep in their step. We made the plays when we had to make them,” said Trojans head coach Micheal Blair. “I think they know that we’ve dropped a couple that we’ve could have won too. When they learn a little bit more, then they’re going to be OK.”

On Meadowview’s next possession, Lee ran the ball is 4 yards and with the two-point conversion, the Trojans were up 16-0.

Tuscaloosa answered twice and with only one two-point conversion, were down 16-14 with 7:47 left in the second quarter.

Meadowview would then tack on three more touchdowns with Lee running back a kickoff, Wilson running for a 3-yard touchdown and Lee throwing to Charles Spencer on a 12-yard pass. With 35 seconds left in the first half, the Trojans were up 36-14.

Tuscaloosa wasn’t done for the first half yet. With an 82-yard kickoff return for the Warriors and a two-point conversion, the score at the half was 36-22.

Meadowview kicked off to Tuscaloosa to open the second half and with the first play, the Warriors ran 65 yards for a touchdown. A good two-point conversion made the score 36-30 with 11:46 left in the third quarter.

Lee was back at it with another kickoff return for a touchdown and then a 15-yard touchdown run to bring the Trojans back far in the lead 48-30.

Tuscaloosa tried to battle back with a 32-yard touchdown run and two-point conversion to bring them back within 10 at 48-38 with 2:55 left in the third.

Meadowview outlasted the clock in the third with a 17-yard scramble by Lee for another Trojan touchdown. The score was 54-35 to start the final quarter.

The Warriors got their final touchdown of the night with a 5-yard run and two-point conversion to make the score 54-46 with 7:03 left in the game.

With only seconds left on the board, Meadowview added another touchdown with a Wilson 1-yard run to make the final score 68-46.

Meadowview takes on an undefeated Russell Christian Academy away next week.

“They’re great kids, they’ve just got to learn that it takes work and it takes certain things that you have to do to be successful, and one thing is tackle,” Blair said of preparing for their next game.